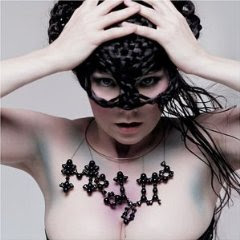 So Björk does not disappoint in bringing us something completely different. Not just different in her own repertoire, but as usual different from whatever anyone else does. Björk firmly holds on to the "last of the true originals in the mainstream" title here.

So this is an album almost all composed of the human voice in different varieties, from beat box to throat singing to choirs to a lot of processed voice. There are almost no instruments throughout the album and sometimes what sounds like an instrument is actually processed voice or someone who can make weird effects with their own voice.

For such a high concept album you would think that songs would sound sparse, and they do in a way, in the same way they did in Vespertine, but this is a heavily worked on minimalism and at times the sounds sounds really rich indeed. An exploration into the possibilities of the human voice in another truly inventive Björk album.

The album consists almost entirely of human vocals and a cappella arrangements; only a few musical instruments are featured: a bass synthesizer on "Who Is It", piano on "Ancestors", a gong on "Pleasure Is All Mine" and a synthesizer on "Mouth's Cradle". However, the vocals are sometimes processed or sampled: for example, the atmospheric haze that dominates "Desired Constellation" was created from a sample of Björk singing the phrase "I'm not sure what to do with it" from "Hidden Place" on her previous album, Vespertine. The album features beatboxing, choral arrangements and throat singing, as well as guest appearances by such artists as Mike Patton, Robert Wyatt, Tagaq, Rahzel (formerly of The Roots), Shlomo and Dokaka.

It's amazing that they managed to work-up something as heavy and intense as "Where is the Line" from voice alone. The engineering on this album is brilliant.