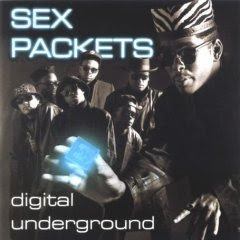 This was an interesting one, and interesting is the word, it isn't great, but it is funny, and constantly entertaining for more than an hour. This is one of those albums that it is hard to do something else while listening to it, the lyrics will distract you every time, and while it can be quite funny it is also a bit tiring.

The first part of the album consists of pretty good funky tracks, mainly based around P-Funk samples, and there is nothing wrong with that, Digital Underground drags George Clinton and Parliament/Funkadelic kicking and screaming into the hip-hop age.

The second half is where the fun really is at, it is a kind of concept suite around Sex Packets, some kind of Virtual Reality drug that makes a person have sex with the picture at the front of the pack. It ends up being a kind of spoof of songs about pushing drugs, and it is very amusing indeed. All this amusement can't help but make the album feel a bit like a novelty product, but there is more to it than that, and you should therefore listen to it.

1. Sex Packets
2. The Humpty Dance
3. Doowutchyalike
4. The Way We Swing