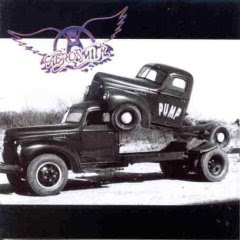 Pump is probably the best Aerosmith album of them all, that is of course a mixed compliment, as it is still an Aerosmith album. At least there is plenty of variety here and even if you don't like the songs there are a couple of good instrumental intros and outros.

In this Aerosmith try to mimic Led Zeppelin, but they lack the sheer quality of Zeppelin to be able to pull it off successfully. Nonetheless it isn't as bad as you might think at first.

Still, it's peppered with cock-rock pearls such as Love In An Elevator that make you not take it seriously. But compared with their previous and later efforts it is their Magnum Opus.

1. Water Song/ Janie's Got A Gun
2. What It Takes/Hidden Instrumental
3. Going Down/ Love In An Elevator
4. Dulcimer Stomp/ The Other Side

7/10 (but slightly higher than Rocks)

It is argued to be among the top tier of Aerosmith's most successful albums, and has certified sales of seven million copies in the U.S. to date. It produced a variety of successes and "firsts" for the band. It produced the band's first Grammy award ("Janie's Got a Gun"). "Love in an Elevator" became the first Aerosmith song to hit #1 on the Mainstream Rock Tracks chart. Additionally, it is the only Aerosmith album to date to have three Top 10 singles on the Billboard Hot 100 and three #1 singles on the Mainstream Rock Tracks chart. The album was the fourth bestselling album of the year 1990.

Janie's Got a Gun:

I wonder what her daddy did.
What did her daddy put her through?
I heard that when they caught Janie
He was found underneath a train.