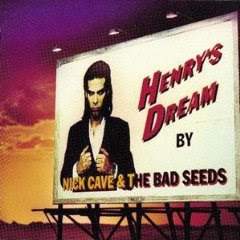 Now, there are some four Nick Cave albums on the list, if you are not counting the Birthday Party album. This means that he is woefully under-represented, unlike Morrissey for example. I am the school that claims that his whole discography, with the possible exception of Nocturama should be here. I am particularly vexed with the absence of Let Love In or Tender Prey from the list.

All that said this is a fucking great album, not only are the songs great but the whole thing is extremely cohesive, there is a guiding line through the whole thing, even if the songs are about different things Cave just manages to imbue them with a sense of retro-nightmare that makes them unarguably part of the same work.

Nick Cave is quite brilliant at creating these albums which while not being quite concept-albums feel like musical numbers in a longer story, here the feel is a bit dust-bowl, early thirties America, without actually explicitly making any musical or lyrical references to it, it just feels it. So yeah, the man is a genius, most of his albums are damn near perfect and he still keeps putting out outstanding work, not only with the Bad Seeds but also with Grinderman. Plus he is a great screenwriter and novelist, And The Ass Saw The Angel is the best work of fiction to come out of Australia since... well... ever! I am a Nick Cave fanboy and proud of it... although he scares me a bit.

There are possible references to John Berryman's series of poems The Dream Songs, which logs the dreams of the protagonist Henry. This album remains a big favourite amongst Bad Seeds fans, although Nick Cave himself was reportedly unhappy with the production by David Briggs. Briggs preferred a "live-in-the-studio" method he had used with Neil Young. This led to Cave and Harvey re-mixing the album, and ultimately to the Live Seeds recordings, as Cave wanted the songs "done justice". It was the first album to feature long-standing members Martyn P. Casey (bass) and Conway Savage (piano, organ), both Australian. The latter is a singer-songwriter in his own right and has contributed distinctive backing vocals to a handful of Bad Seeds songs; here he and Cave deliver a rousing duet in the chorus of 'When I First Came To Town'. The album is considered by some to have a vague "concept", i.e. song narratives overlapping and/or sharing characters.

Ten out of ten my ass

Going a bit far back down the list, but Miriam Makeba died yesterday :(

So after seeing this up here for a few days I finally went ahead and got it (I did like the Birthday Party after all) and holy shit is this album amazing. Is all of Cave's stuff like this? Because if so then another fanboy has been born.

Henry's Papa: Not everything is as good, but some of it is better. If you liked the Birthday Party _Tender Prey_ is essential. Other great albums for me are: _Let Love In_, Boatman's Call and Abattoir Blues/Lyre of Orpheus. I haven't had time to give the proper respectful listen that Dig, Lazarus Dig!!! deserves as I am too busy with this list.

Murder Ballads is also excellent, but a bit more mainstreamy, not that that is necessarilly bad.

Tommy: In the context of Nick Caves work I think it is. More pop-songy, not just because of the Kylie collaboration as well. With the exception of the amazing O'Malley's Bar, the other tracks amazing as they are seem more radio friendly... if you ignore the lyrics.

I wouldn't really call "The Curse of Milhaven" radio friendly.

I guess I just have this notion that 10/10 means something so mind-bogglingly spectacular and perfectly flawless as to be near incomprehensible to mortal men. I realise I am a lonely fool in this regard, and I shouldn't be suprised that you have different feelings about such matters since you gave Aqualung a 10/10 too.

Nick Cave is great and while this album is very good I like Let Love In better, and I really don't understand why this is on the list while that isn't.