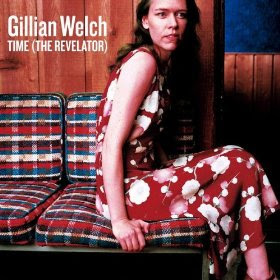 What a great album, like the lovechild of Bert Jansch and the Carter Family this is some pretty different folk/country music. The guitar playing is very reminiscent of the great 60s UK folk bands like Fairport Convention and Pentangle, and of course Bert Jansch and even Nick Drake, but the music and singing is very much American in the folksier sense of the term.

It is interesting that this album upset a lot of country purists because it really marks an evolution that the UK had done 35 years earlier, not much of a innovation, and it sounds pretty fantastic.

The album is dark overall, often bluesy in its darkness but it can, like the previously mentioned bands stretch out a song to 15 minutes without it seeming dull. It is always great when a great music genre learns from outside of itself and incoorporates it in a beautiful way. This album does that.

Welch and Rawlings received a great deal of recognition for their work on Time. The album received many award nominations and was included on many "best album of the year" lists by critics. It has since been included on a number of "best of all time" list.

During a period in his life in which he was living with a friend in New York City, folkie Devendra Banhart had access to only this record, which he now proudly regards as "one of his favorites of all time."