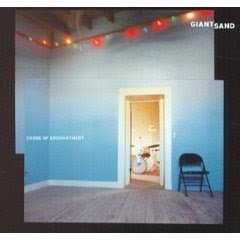 This is a pretty nifty album. Clearly drawing inspiration from loads of other stuff but managing to keep their own individual identity. Drawing from some pretty great stuff, from Lou Reed and Neil Young to Thelonious Monk and loads of crap in between.

Sometimes people who draw inspiration from other stuff might be derivative, but when this is done well, mixing stuff in a new and original way you get an album like this. That's the difference between being derivative and having discerning taste in music.

So this is a pretty fun album, the music is alternately chilled and hard, with great lyrics and great playing. A really fun album to listen to, that never gets boring or old. Highly recommended.

Giant Sand is an American rock band, based in Tucson, Arizona, USA. The name is shortened from the original Giant Sandworms, a reference to the creatures in the Dune books. Overseen by singer-songwriter Howe Gelb, its membership has shifted over the years—at times with each album. For a long while the band's rhythm section consisted of John Convertino and Joey Burns who left the band when their side project, Calexico, grew more widely known than Giant Sand and, as Gelb characterized it in 2004, Calexico "began to work against Giant Sand and eat away at what the band was".