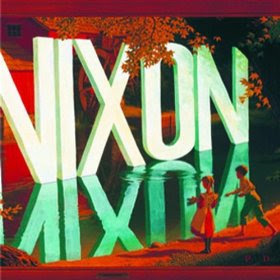 1. The Old Gold Shoe
2. Grumpus
3. You Masculine You
4. Up With People
5. Nashville Parent
6. What Else Could It Be
7. The Distance From Here To There
8. The Book I Havent Read
9. Petrified Florist
10. Butcher Boy

As a concept album about Tricky Dick this is an absolute fail. As music it has a lot of win to it. This is a chilled album which sometimes reminds me of stuff by Joe Henry in the way that it is filled with memorable lines. This being said the album itself is not particularly memorable.

The album goes through a variety of styles, but there is a clear, pervasive R&B influence which is manifested in very unique ways. Fortunately we are having a little spell of good albums. This is another good one, even if not amazing.

There is more good stuff yet to come, and I am finally catching up on music I did not have much time to listen to then. I can see the light at the end of this list/tunnel. A good and a bad thing, but albums like this help it go faster.

The sleeve is a painting by Wayne White, a childhood friend of Kurt Wagner who also provided cover art for Thriller, Aw Cmon and No You Cmon by the band.

I like this Album but it was a big mistake for the book to put this next to Giant Sand. While both albums are pretty unique in terms of popular music they have enough similarities to each other that listening to them next to each other kind of takes away from the individual albums.

That being said Chore of Enchantment is the better album, I am excited for the Calexico album (a giant sand side project) and the SIlver Jews album (a pavement offshoot).