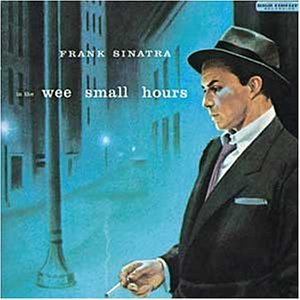 It's Sinatra, but not as you know it. He had recently broken up with Ava Gardner and this is Sinatra's ultimate breakup Album. I am not usually a big Sinatra fan, but I have to admit I was pleasently surprised by this Album. There is definitely a depth of feeling here not present on his more chirpy releases, and that -- and the fact that its tracks have not been as overplayed as the more "casino-friendly" Sinatra -- really helps you hear him with a new frame of mind. The guy was good. Amazing? No, not really, but much better than I was prepared to give him credit for.

I was actually discussing this with my friend Adam this morning, about how we have put so much importance on the singer/composer/songwriter combo, and how actually for a long time this was not at all done. Sinatra is a good example of that time, he is a superb performer of songs that other people wrote and composed. Still, he manages to instill I Get Along Without You Very Well with a longing that can only be compared to Chet Baker's version.

I got the full album for streaming on Napster. (I will tell you where I get the albums in case you want to do the same)

1. I Get Along Without You Very Well,
2 .Mood Indigo,
3 .In The Wee Small Hours Of The Morning,
4. Last Night When We Were Young

Dancing on the Ceiling on this Album was not later made famous by Lionel Ritchie. Just thought you should know.

Yes, where do you get all these albums to listen at ?

Anonymous: Well there are several ways, you can buy them. You can download Napster which will let you stream most of them for about 10 £ a month.

Or you can go the illegal way and download them with eMule, Soulseek or any other peer to peer.

This is a remarkable album for a number of reasons. Firstly, it's amazing to hear Frank Sinatra this melancholy. When we think of ol' Blue Eyes, he is usually the finger tapping leader of the Rat Pack. He pretty much breaks down in front of us here.
Secondly, this album has to be given particular credit for the lush orchestral backing. I think it's a guy called Nelson Riddle who plays a big part in this album being so moving.
Bonus points too for that album cover. You can almost see the smoke move.
Response to Mr. Silva: I think it's unfair to criticise an artist because he is not a songwriter. Sinatra is a performer like no other. Very few have been able to give the songs he sings any of his personality. He is one of the great song interpreters.
And as for your Lionel Ritchie joke, I think the book is all the poorer for not having one of the Commodore's masterpieces in its collection.

Hi Jack! Good thing you're doing this as well.

It is a really good album and not something oyu would expect.

don't forget that this is the world's first modern album ever.

before that there were no such think albums but small short EPs.

Pretty much all of these are available to listen to on http://www.radio3net.ro/1001/?cx=home free and legal I think. :-)

the world's 1st concept album ever made!

also world's 1st comeback album ever made as well!

I agree Frank Sinatra sings very well and conveys feeling. But despite being so iconic, this album has aged badly. The sappy strings production ruins any appeal these songs might have had for me. However "Can't We Be Friends?" has no strings and is a great tune, and interesting lyrics too. I wouldn't care to hear the others again unless I needed something to help me fall asleep. The harp playing seems well suited to a lullaby.