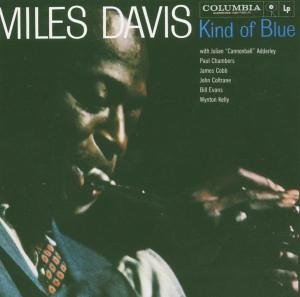 Have you heard this album? No...? What the hell are you doing here anyway... have you been in a coma for 46 years? If you have my apologies, if you haven't and still don't know Kind of Blue please click the link at the bottom of the review to the Amazon of your preference seeing as I get 5% of your spending hehe, while you're at it buy yourself a 50 inch LCD TV... thanks.

Ok, this is probably the best and most important Jazz album of all time. Not only is it innovative shit, bringing to fruition what you could hear in Birth of Cool but it is also listenable! Yay! And listenable is an understatement, it is one of the most beautiful albums I had the pleasure of listening to. First it's a super-band, not just Davies, but Coltrane, Evans, "Cannonball" Adderley and so on, making it one of the best ever combinations of interpreters in Jazz history. There is not one single dispensible track in the whole album, from So What? to Flamenco Sketches this is gold.

Interestingly enough, the band had never played these pieces before the recording, Davies showed up with some sketches of what he wanted and all else was improv. More spectacularly still is the fact that all of the songs in this album were done in a single take, except for Flamenco Sketches which took 2. In the CD editions of the album the alternate take for Flamenco Sketches is added as a bonus track, and honestly it is not any worse than the definitive version.

This is an album which I have discovered quite some years back, in my first year of university. I had to leave home to be able to properly appreciate it, seeing as it was one of those albums that my father played and as a reaction I disliked, because I was forced to hear it. But since rediscovering it 6 years ago I have not gotten tired of it, and return to it often and fondly. There are not many albums with the same capacity as this one. And frankly I couldn't give a monkey's ass for all the tonality and modality shit happening here. The good thing is that that stuff never overpowers the beauty and quality of the music itself.

So, if you don't know it get it, if you don't like jazz get it, you might start liking it. You can stream it on Napster or buy it at Amazon, UK

All of it really. It;s just five tracks for fuck's sake.

Miles, Coltrane and Evans did heroin, but didn't share needles, so learn from the Jazz masters kids!

Well they probably did... but they're all dead now! Just say no!

Three of the interpreters on this album will have Albums reviewed here on their own releases. (Miles already had one but he will have more)
Posted by Francisco Silva at Tuesday, May 23, 2006

"And frankly I couldn't give a monkey's ass for all the tonality and modality shit happening here. The good thing is that that stuff never overpowers the beauty and quality of the music itself."

what the fuck? what does this even mean? the decision to improvise based on modes and not chord progressions is not the "music itself"? how would that "overpower" the "quality"?

i'm all for someone enjoying music without over-intellectualizing it, but it's kind of silly and dismissive of you to speak over and over of it's "beauty" when the (brilliant) musicians who made it, were thinking more of the "modality shit." now, if you don't really understand that aspect of their construction....you should just say that. not "i don't give a monkey's ass," because that comes off as sort of ignorant.

I am pretty sure they weren't thinking more about modality and tonality that the beauty of the music itself, and that is what I mean. Formal consideration don't overpower the pure beauty of the music. Because that frequently happens, this just happens to make a perfect balance. By the way this is the last comment anyone leaves as anonymous, leave your fucking name or nick or whatever, sign at the end.

Sorry. I didn't mean to click the anonymous one.

If you mean that the emotion of their playing is still evident as opposed to music where it feels stiff and robotic because it's too formally constructed, I can dig it. I guess I was just irked by the not giving a monkey's ass about said musical "shit," because without this (groundbreaking) consideration to the musical theory, the album would not be considered as important as it is. I think it's a really important aspect, in addition to how beautiful and (near)perfect it is.

In fact, you could even argue that it makes it that much more amazing, that they could make this music so natural sounding with a method that was extremely different from the "charts" and chords that had pretty much dominated jazz and popular music (and still do, actually).

By the way, I'm not posting comments out of "shit-headedness." It's just a pretty engrossing blog you've got here.

I agree absolutely with your point then :P

too bad, Charlie Parker never live to hear this great jazz album and also all the people who died before 1959.

Buddy Holly died couple months before it was released.

Billie Holiday died couple months after, but let's hope she did get to listen to that album.