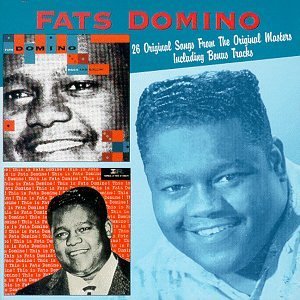 Yay! I found a mistake in the book! Firstly they use the wrong cover for the album. They use the cover for 1958's This is Fats and not 1956's This is Fats Domino, which although it might not seem like it by the name are completely different albums. The actual cover, which I couldn't find on the Internet, is the bottom left one on the above picture which chubby little Fats and writing behind him. So there! Take that, book producing people at Cassell Ilustrated! Put that in your wrong-album-cover-pipe and smoke it! Oh and the wrong-title pipe! They say this is This is Fats, while it is in fact This is Fats Domino. Confused? So was I. But I am sure this is the album they describe, with Blueberry Hill and shit.

Oh well ,now I have no time to talk about the album, but at least we know the right cover!

Oh, just joking. I almost had you running for the arsenic didn't I? What no musical discussion today? I shall overdose on laudanum!

Here goes. With this album, the third in Fats carreer, he very successfuly bridges the gap between R&B (real R&B not Destiny's Child, which by the way will be reviewed here in some years) and Rock. This makes for a much more enjoyable hearing experience than boring old Elvis that debuted this same year. So, again, Boo Elvis, Yay Fats. Still, it's not particularly an attention grabbing album, although it starts with the classic Blueberry Hill, a great track then and now. Blue Monday is another great piece and so is La-La and in the whole album Fats' great piano playing comes through very nicely.

So, great, revolutionary music, but for some reason I don't click that much with it. I recognise its importance and quality but I am probably missing something. Again, when albums were revolutionary in 1956 they might not have the same impact now. Still, very enjoyable.

Again the Goetian Demon Furcas provided me with this album, as Napster didn't have it! Fuck them and their greatest hits compilations! Me wants albums!

Blue Monday was not later made a hit by New Order.
Posted by Francisco Silva at Saturday, May 06, 2006

This is an underwhelming record today. It's a sprinkling collection of pop hits by a tuneful singer with a tinkly piano and a mediocre jazz backing.

However, Fats Domino is necessarily regarded as one of rock and roll's founding fathers. His influence is paramount - most easily seen in Paul McCartney's work.

It is impossible to get the original 'This is Fats Domino' on record so I listened to 'Rock n' Rollin' with Fats Domino' PLUS the original record. Both have their moments. 'My Blue Heaven' and 'Blueberry Hill' being the stand outs. Probably best of all is a bonus track called 'I'm Walkin'' which finally quickens the static drum beat.

So it is not the most exciting record. At times it's even dull. But it's vital to any rock student's studies to know of the Fat Man. After listening to this and Little Richard's forthcoming album, it's fair to say that Richard provided the rock, but Domino must be credited with inventing the roll.

jack: Damn right, Little Richard had all the fire which is lacking here, as well as the hooks. But music really evolved from a mix of Richard and Fats for the combination of slow and fast songs in most albums from the 60's onwards... or in Elvis.