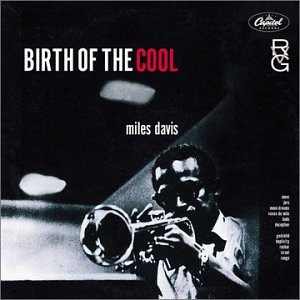 So this is the birth of the Cool. YAY! Ok, not so yay. It is a great album, yes, but compared with what Miles Davis would put out later (mainly Kind of Blue) it pales a bit. The Cool is definitely taking it's baby steps on this album.

Still, it's a change from all that swing. And the greatness of later cool music is here in its embryonic form, and if only for that it is worth listening to. The first two tracks of the album are a great opening, and in between other so-so tracks there are real gems, like Venus de Milo or Boplicity.

If you have any interest in Miles Davis, and if you don't you're a stupid asshole, you should check this out. But if it doesn't click that much with you don't worry, it was basically panned by the critics when it first came out, only in the revival of 50's jazz later on did this come to surface. And I repeat again, it is a very very interesting album, particularly if you know the later Miles Davis stuff, and as a document of arguably the most important jazz musican ever it is essential hearing. But again it didn't do for me anywhere near what Kind of Blue did for example. And this is not my first hearing of it. I have tried and tried Birth of the Cool for years now and always left feeling a bit blah.

The album does have something for everyone, from the bop to the more quiet and it even has a sung track, Darn That Dream, which seems to fall much more into the realm of traditional jazz, than the rest of the album, which is frankly revolutionary. The nine people playing on it are always so together it feels like a trio or a quartet at most, giving it an intimate feeling not found in most jazz at the time.

You can stream this from Napster, and do listen to it even just for curiosity's sake.

Or buy it at Amazon: UK

Miles Davis' is not known to have used his trumpet as a sex aide.
Posted by Francisco Silva at Sunday, May 14, 2006

Considering the proscription on compilation albums (and starting date of 1955) it's arguable that this should be in the list of 1001 albums. Sure the record came out in 1957, but all the recordings were made in 1949/50, which explains why they don't sound as modern or cutting as Kind of Blue, Ornette Coleman, Thelonious Monk (famously parodied in a CSI episode entitled Felonious Monk).

Loving the blog, wish I'd though of it.

You might have a point there Lanark, and thanks for reading :)

this is first album to mix all the older stuff of the past and turn it into a concept album, instead of compilation!

and there were no concept albums at the time when these songs were recorded!

Robert Johnson's King of the Delta Blues Singers did the same thing in 1961!