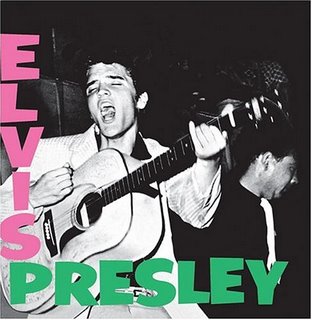 One year on from In the Wee Small Hours and...Oh Elvis, what can I say but I hate the crap out of you. Still, you gotta admit... he was white. And therein lies his merit, or lack of it. He propelled his style of music to the charts not because he was an original but because he made his type of music acceptable.

Now that that's out of the way, let's take this album at face value. It is a very uneven thing, for each great Blue Suede Shoes or Trying to Get to You or even Blue Moon, there's a load of crap which is even more crap because it is not ironic or tongue in cheek, as it was his debut album. Still, there is some merit here, particularly in the songs I mentioned, and I am forced to admit that his Blue Moon is most definitely the definitive version. So it's not wasted time listening to it, but you'll probably be puzzled as to why this man has created such a cult.

There is not even consistency to the album; he's going everywhere, from country to rock to just schmaltz. This is probably the result of the album being a mix of several recordings, both in Sun and RCA records (the Sun takes are much inferior). Still, I have to admit that if you abstract yourself from the man and his image there's a couple of tracks here which are not half-bad.

Couldn't find this record on Napster (no matter how much I dislike Elvis, this is still a glaring omission), but I resorted to my VERY LEGAL "record collection" *cough* *cough*

This album cover is evidence of time travel. Not only did Elvis steal his music from black musicians, he got on a time machine and stole his album cover from the Clash 1979 's London Calling.

Elvis is Dead.
Posted by Francisco Silva at Wednesday, May 03, 2006

Ouch! You really despise Elvis! He will always be the King of Rock and Roll to me.

I confess that when I listened to this album I listened to a different version. The only one I could get had bonus tracks which were recorded around the same period but not on the original album. This meant classics like 'Heartbreak Hotel' and 'Lawdy Miss Clawdy' are included. And they do make a difference.

Still I enjoyed his take on 'I got a Woman' and 'Tutti Frutti'. There's no voice quite like Elvis's. He manages to invest a strange mix of sex and innocence into the tracks. I think that was and still is his appeal - his essential boyishness.

So while I can't state that this is one of the great albums. It is poorly produced but it is important in that it traces the man who, like him or not, is one of the most vital contributors to rock music in history. As John Lennon said 'Before Elvis there was nothing'...

And he is still alive somewhere.

Oh come on, before Elvis there was plenty, but they were black! No self respecting white person in the 40's or 50's, even in the 60's would listen to a black guy.

All Elvis did was make it acceptable for white people to listen to what Little Richard had been doing.

I can't disagree totally but it's more black and white (excuse the pun!) than you are saying.

Certainly, Fats Domino and Little Richard were selling records in the white charts. And the great Jazz artists were almost all black. This didn't always hinder sales.

What Elvis did was sex up Rock and Roll. Little Richard (flamboyantly gay) and Fats Domino (wonderfully chubby) were hardly sex icons for the 50s generation. Elvis hit the young generation right in their libido.

It is true that Elvis's legacy is more for his record sales than any artistic output. But the guy needs to be given credit for being the first popular image of music, and for his underrated vocal talent.

i know why you don't like Elvis because of his world-exposed legacy.

you guys forgot about Hank Williams.

he got plenty of styles and sexual appeal who never live to know Elvis.