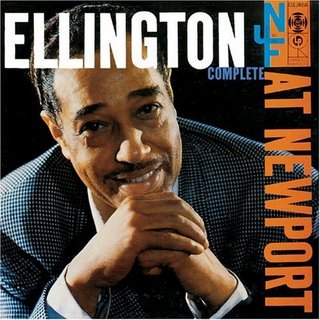 This review is not actually of the album put out in 1956, but actually of the 1999 re-issue. This is for the reason that the album put out in 1956 was actually a studio "reconstruction" of the concert. There were some problems with the original recording and therefore Ellington and his band went into the studio and re-recorded the album. I am reviewing the actual live concert which was recovered, remastered and re-issued in 1999 in all its original glory. The concert itself was a huge event. At the end of Diminuendo, Track 19 on CD 1, a riot broke out among the audience, and in the re-issue you can hear Ellington trying to calm down the public etc.. So this re-issue is the important recording, not so much what came out in 1956.

That said, this album is actually too much of a good thing. I like Duke Ellington, I always loved Take the "A" Train and so on. But this forty tracks long "tour de force", which includes the original concert and the studio recording which was put out in 1956, makes you exhausted after the first hearing, and after the third I definitely need not to listen to Ellington for a while. Don't take me wrong, this is definately a "tour de force" the band is amazing, and you can see why riots broke out during the concert. More than that, it's a precious historical document and a testament to the power of music. But it's something like two hours long. Add to that the extremely boring intermissions, particularly those where Father Norman O'Connor does his interventions, and this album can definitely take a bit of editing. By my third listen I cut out all the overlapping versions, leaving out the studio recordings, as well as the spoken bits and it was a much more enjoyable experience. Still, there are some amazing tracks here, Tea for Two, Sophisticated Lady, the above mentioned Diminuendo and Take the "A" Train are all astounding, as is Black and Tan Fantasy and even Star Spangled Banner and Mood Indigo.

Basically this album definitely deserves a listen, and as I am writing I am bobbing my head to Diminuendo. If only some bits of it were a bit more edited. Yet listen to it at least one time all the way through, particularly due to the impressive bits after the riot breaks out. Then, use your discretion and cut out what bores you.

I streamed this album from Napster.

Or buy it at Amazon: UK

Sorry if I'm a bit more serious today, but boy, do I have a hangover.

1. Diminuendo In Blue And Crescendo In Blue
2. Take The "A" Train
3. Tea For Two
4. Black And Tan Fantasy

Hangovers are not funny.
Posted by Francisco Silva at Sunday, May 07, 2006

Now I don't know much about jazz but I know what I like. From what I've listened to on this infamous deathwish list so far, I like the cool style of Miles Davis more than anyone. Mr. Ellington's is real big band jazz and I don't think it suits the record format as well as Miles Davis's albums do.

Fortunately, this is a live recording so it captures the Duke while he's at his most charming. Listening to both versions of the Newport concert (one live, one studio) we can easily hear how much more comfortable Duke Ellington and his band are in front of a crowd.

One of the remarkable things about this album is the story it tells. Pandemonium and riots are heard on record capturing how exciting these live bands were at the time. The studio version is almost dead as a result. So this album is about much more than the music. It's a great testament to Jazz's popularity in the 50s.

Jack: Yeah, I'm pretty sure you can even get better versions of all the songs here by Ellington on other recordings, however it's the context of the album that makes it earn its place on the list.