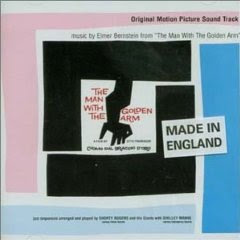 The first soundtrack composed fully for a film on this list, this is a great soundtrack indeed. Elmer Bernstein really let himself go with a jazz themed soundtrack inter-spreading some more orchestral emotional moments.

The main theme, which is repeated throughout the soundtrack always sounds great and always pack a pretty great punch. A film soundtrack should be a mood enhancer more than anything when you are watching the film, but when listening to it on its own it should evoke feelings similar to those on the film, and that works pretty well here.

So a pretty evocative soundtrack which works perfectly on its own. This kind of considerations is particularly important than in ones where the music is just used for a film, but these are usually also more satisfying.

The film's soundtrack was a landmark in film history, being hitherto one of the most creative and inventive jazz scores heard in a major motion picture; it followed on somewhat from the score provided by Alex North for A Streetcar Named Desire.