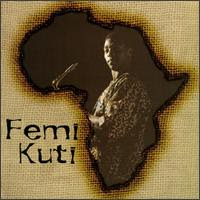 I really like this album. But the reasons I like it do not make it great or even very original. I like it because I love Fela Kuti, Fami Kuti's father. The truth is Femi Kuti sounds very much like his father, even if his songs are slightly shorter and not as chaotic, something which was interesting in Fela.

So it sounds like a bit of a re-run. Fortunately Femi Kuti keeps much of his father political and social interventionism intact in his songs. Also like his father he enjoys making very long introductions before the voice kicks in, this always pays off.

So I really enjoy it because I love Fela so much. I would probably be better served with more Fela albums, but at least Femi has the excuse of following in the musical tradition of his father, and he does this very competently. So really it the next best thing to Fela.

Femi Kuti's voice is featured in the videogame Grand Theft Auto IV, where he is the host of radio station IF 99 (International Funk 99, described as "playing a great selection of classics from West Africa, the US and elsewhere").