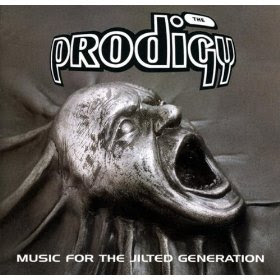 Ahhh, The Prodigy, many memories. If you compare this to other popular electronic groups around at the time there is an immediate difference, this is much more hard driving music.

There are good and bad things about this album. Let's get the good first, it is nearly perfect dance music, the rhythm is so accurate that even if consciously dislike the music it is hard to keep your head from rocking to it while you listen, in this sense it is exciting music.

The bad things about it are that is is definitely too long, not only as an album, but some of the tracks are long to the degree of distraction, this makes the album something good to have on at your apocalyptic rave party, as you don't have to change it, but it is not something to listen to at home, really. Then at moments it is very dated, to the point that you are almost embarrassed that you are listening to it, all this makes the album sound very tacky at moments.

The cover of the inner artwork of the record was analysed in an article published in 2008 in the techno underground Magazine Datacide. The author compares the picture with a persiflage which was published in 2003 on the Kid606 album Kill sound before sound kills you. The article not only describes the representation of Raves in graphic artwork but also describes the marketing strategy of the band with the album and criticises it from a marxian point of view:

'With the picture The Prodigy are taking a stance in the conflict of ravers versus the police in those days. At the same time this statement is used to market a rebellious attitude. The picture is part of the artwork of a record - which is of course a commodity. The teenage (and male) consumer ought to identify himself with the presented rebellion. With the help of the artwork a certain image of The Prodigy is established: They should be seen as anti-stars, who define themselves through refusal and opposition(...)'

at an awful, awful album cover.

indeed, it looks like one of crappy statues the you find at thrift shops having a nightmare.