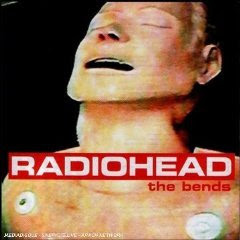 We are in 1995 and you hear that Radiohead are putting out a new album. Then you are thinking, "oh yeah those guys from Creep". And you think you'll get a slightly above average album of post-grungy derivativeness. Then you get home and you put this on.

And then you listen to it again and again, and you realise that Pablo Honey was the fluke, not this. This is amazingly well thought out music, recreating arena-rock to the thinking public, this is new. In the context of the endlessly derivative mid-90s Britain nothing sounds like this. In the context of the US reeling from the end of Nirvana, nothing sounds like this, although Smashing Pumpkins would like to.

There is not one note wrong in this album, it bridges the gap between Pablo Honey and the possibly even more amazing OK Computer perfectly. It creates just the right balance between accessible and strange, in the same way the Pixies did before them, albeit in a very different style. An album which creates a new musical style all by itself, a pivotal album without which comparatively crappy bands like Coldplay or Muse would not exist. This is the best album of 1995, bar none. A perfect ten.

The album's title, which refers to decompression sickness, is one of many references to physical illness and brokenness on the album, but has also been seen to tie into the band's own career trajectory. According to one biography, "For their second album, Radiohead chose an extremely symbolic title... Radiohead rose too soon (due to the success of 'Creep', which they were hardly prepared for) and had to suffer the unpleasant consequences (critical backlash, record company pressure, general confusion and dismay about how to continue meaningfully)."

Supergrass and Radiohead and now we've got Alien Lanes to look forward to tomorrow? What a perfect little strech we've got here. The Guided by Voices one is the "growiest" by far but I do hope you'll give it a fair shot. It's well worth it!

I am really liking it, actually :)

I like this album, but it's still very much in the vein of post-grungy derivativeness, and easily outstripped by actually original (and far less annoying) 1995 albums like Post by Bjork or 94 Diskont by Oval.

I mean, it's U2+Big Star+REM, basically. Sometimes they glam it up a bit, as was the fashion. And ugh! Those awful grungy bits where they do the Nirvana riffs and ruin otherwise fine songs.

I like grandiose pop rock but I don't think they went beyond being "pretty cool" until OK Computer.

That being said this album still deserves a 10/10, but its not perfect by any means. Now if they had gotten rid of a less important and bland song such as Sulk or Bullet Proof, and included Talk Show Host instead, then this would be a perfect 10/10. I really don't understand why that song was a B-Side...

So what did that guy say? I have to know!

Sorry about complaining but I was half asleep at the time.