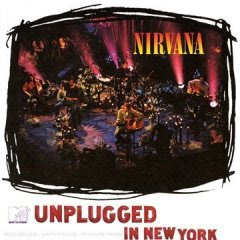 One can only imagine how pissed off MTV was that Nirvana's Unplugged included only one hit in Come as You Are and 6 covers of bands not particularly attractive to its audience. An early David Bowie track, one from the almost unknown to the mainstream Vaselines, three from the equally unknown Meat Puppets and another one from blues legend Leadbelly.

Well, if they were miffed fuck them. This is heads and shoulders above any other Nirvana album, and this is not only for its mythical status as a posthumous album, a last will and testament of Cobain, but because all the tracks in it are consummate live performances.

It always raises the spectre of what Nirvana with Cobain could have become, the direction seems to be clear not only from the covers but also from the twist given to their own tracks. The album never flags, Cobain shows a depth of feeling in his performance unlike anything he did before. A great live album.


The band dedicated two days to rehearsals. The rehearsal sessions were tense and difficult, with the band running into problems performing various songs. During the sessions, Cobain disagreed with MTV as to how the performance should be presented. Producer Alex Coletti recollected that the network was unhappy with the band's choice of the Meat Puppets as guests ("They wanted to hear the 'right' names-Eddie Vedder or Tori Amos or God knows who", Coletti recalled) and the dearth of hit Nirvana songs on the setlist. Upset, the day before filming was set to take place Cobain refused to play. However, he appeared at the studio the following afternoon. Cobain was suffering from drug withdrawal and nervousness at the time; one observer said, "There was no joking, no smiles, no fun coming from him . . . Therefore, everyone was more than a little worried about his performance."
Where Did You Sleep Last Night? :