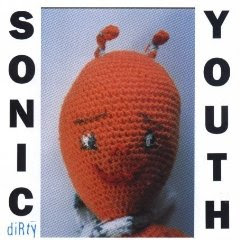 1992 is proving to be quite a good year for albums. This is another pretty good album by Sonic Youth, even if not comparable to Sister or Daydream Nation it is still pretty good. We had seen a move towards a more mainstream sound with Goo, and this continues the trend.

Although the sound is more comparable to the grunge bands around at the time, it is still very recognisably Sonic Youth, the feedback, the dreamy rock soundscapes, the voices, it could be mistaken for nothing else, and that is a good thing.

As noted above, "Nic Fit" is a song originally by the DC band Untouchables. In that band is Ian's brother Alec MacKaye.

Under the tray of the first pressing of the Dirty CD (and later in the booklet of the deluxe edition CD and LP) is a controversial photograph of performance artist Bob Flanagan. It was removed from all other pressings.

The track "Sugar Kane" includes a possible reference to fellow indie rock band Half Japanese. The lyric "kiss me like a frog" may refer to the Half Japanese song of the same name.

In the movie The 40 Year Old Virgin, the character Cal played by Seth Rogen is seen
in one part of the movie wearing a t-shirt of the album cover.

Sonic Youth's "JC" was inspired by Joe Cole's murder, and the Sonic Youth song "100%" was dedicated to him. Joe Cole was also a director for their music video "My Friend Goo".

Using this as a major shit/pearl detector!
Abraço!

I remember loving this album at the time, but your criticism of it is pretty valid. It's a very patchy album for me. The less commercial parts are easily the best. I'd have put Wish Fulfillment in my top tracks list though. One of Lee Ranaldo's best. I;d have put his 100% b-side "Genetic" on the LP too.

Oh yeah... I've put up a list of the changes in the new edition of the book.

20 old ones gone and 20 new ones added. All from 2002 onwards. Very glad to see stuff like The Darkness and Kings Of Leon bumped. ;)

Still some huge omissions to my mind - Burial's first LP should have been added, along with Hot Chip - The Warning, Battles - Mirrored and maybe Sigur Ros - Takk.

It's interesting to see that most of the bumps are recent albums, and that a few of them have simply been replaced by newer, better albums from the same artists.

Is this just a revised version of the same book, or a new book entirely? I know there's another book out now, as well, that only covers 1000 albums, but I've been led to believe that the composition of said list is very different from this one, although mostly from the late 80s onwards.

On the album: I really have trouble with Sonic Youth's 90s work, but their 80s catalog holds up, and their three most recent LPs have been ace as well.

Yeah, it's a revised edition.

I guess that they kept the changes to the last few years so that the majority of the typesetting and printing would remain unchanged. It's a pretty lazy revision all told.

How can Smile be gone?

That is a great album...Thank God The Darkness and 50 cent are gone!

Whoa whoa whoa! They dropped the Hives? Fuck them.

And the Darkness rules. They dropped them but not that second Bee Gees album?

And does anybody know why Neutral Milk Hotel isn't on this list? Isn't In An Aeroplane Over the Sea supposed to be a 90's classic or something?

That revision is fucking shit. Who the fuck decided that Kala was better than Arular? That revision is so superficially dumb, it just looks like a sham of an update for a new release which will hopefully sell more copies for them. In Rainbows is better than Hail to the Thief? I dont understand what they are doing here.

Also, please come back Francisco :( its been a few days, where are you?

How can they not be there!

I still think the most glaring artist omission for the post-80s part of this list is probably Yo La Tengo. If they hadn't decided to fill it up with lesser Sonic Youth albums and the complete works of Suede, maybe they could have fit I Can Hear the Heart Beating As One on there somewhere.

I'd also argue that both MIA albums should be on there, and I'm kind of bummed that they didn't drop a few of the albums from way back in the 70s.