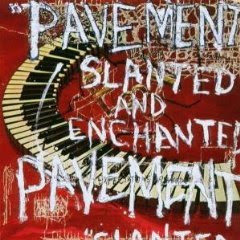 Ahhh, an album I really enjoyed. We haven't had one of these since Slint. As you can tell there is probably some kind of pattern to what I like, and this was a predictable one. Yes, Pavement is gud!

Life is too short to listen to music which does not sound like the artist really needed to do it. Music needs to have a certain punch, a feeling that it is coming from deep down in the artist's being. Pavement sounds like that, it is not jumping on any bandwagon, it can't even be called grunge, maybe fusing grunge with the Modern Lovers would be good description, and that makes for a great album.

Pavement seem like a distillation of a lot of what is good about music in the 20 years before it, from Velvet Underground, Modern Lovers, Wire, Television, Violent Femmes, Slint into something almost timeless in its music. It could have been done in the mid to late 70s or any time after that. This classic quality, like that of all great albums, is what will keep the album popular and fresh for the next 30 years or more.

The album regularly appears at the top of lists of most important albums of the 1990s, despite relatively low record sales. The album was distributed to critics as early as 1991 before its original release and when the rest of Pavement joined the band, so when the album was released, the band had a bassist and Gary Young's drumming was so shaky that Bob Nastanovich kept time for him, as well as work as tour manager. In 2003, the album was ranked number 134 on Rolling Stone magazine's list of the 500 greatest albums of all time.

In The Mouth a Desert:

there is definitely some gold in these years if you can sludge through all the crap. I love pavement... and the silver jews as a matter of fact

I think you're right in saying that its becoming slightly more predictable to pick the albums that you will give 10's to. I knew that this album and Slint would be one of them, but its not like i dont agree with you, they are both amazing.

I think the reason it's becoming more predictable is that the music is starting to bring more baggage along with it - it's music to which you add the emotional content of experiences and personal biography. Whereas in the 50s, 60s and 70s you were discovering why aritst who had later become bland and lazy were admired in the first place. Now we're well into the 90s most of this will be music we already know well.

I actually thought you were going to criticise this for being (Doolittle + This Nation's Saving Grace) x wimps.

It is really good, though.

I envy you. One of my favourite albums, although my wife can't stand Pavement (or MBV for that matter) so it doesn't get played as much as it used to.

I'm still stuck back in '67, and desperate for Hendrix to appear in the list. I'm convinced doing this chronologically was a mistake. ;-)

Ian: I like the chronological thing. It gives you a much better notion of influences and development of music.

Like what you are doing. But do you have an email address ?