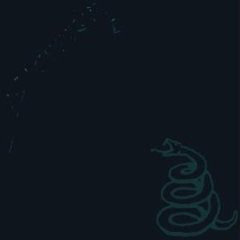 Metallica have finally lost any pretence to being a Metal band by the time this album came out. It ends up being something like hard rock/pop. And, honestly, good for them. They were never a good metal band. They are not a good band here but at least they are more successful.

This is one of those album where you know at least half the tracks, which for such a hard album is quite weird. It is the culmination of the "mainstreamisation" of Metallica. And it has some catchy tunes, no doubt. Still, it is very much top-heavy and after Nothing Else Matters... well nothing else matters.

Unfortunately Metallica keep some elements of Metal which don't really work here, the lyrics are piss-poor... even if they are easy to memorise for the non-English speaking Euros who make up their greatest market. It is a not horrible pop album, but a pretty terrible Metal album... so let's take them as pop and give them a middling grade.

While the album and the band were critically praised and commercially successful, some fans expressed disappointment in the new direction taken by Metallica. Gone for the most part were faster staccato riffs during verses and throaty vocals found on the band's first four albums; the overall speed and complexity of the music was greatly reduced. The Black Album presented a more radio-friendly, commercially accessible Metallica, especially evidenced by the ballad "Nothing Else Matters". Moreover, following the success of "One," the breakaway single from their …And Justice for All album, five videos were released from the Black Album. ("Enter Sandman", "Nothing Else Matters", "Sad but True", "Wherever I May Roam" and "The Unforgiven").

I've recently come across this blog of yours, and oddly, this Metallica one was the last album off of the list that I listened to, myself! I've skipped around in it a lot, though, but I've heard about 50% of the list and plan to finish. Very interesting to read your reviews of someone who's also trekking through the big 1,001!
~Marilyn Roxie

I really don't like Metallica much, They were a "just OK" metal band and then a "just ok" pop band and now they are just shit.

Still! Elements of their music have led to good things on the part of other artists. I suppose they are like the Doors in this respect.

I think you're very generous in givin g a seven.

Am I right in thinking that there's only S&M to go and then we're finally done with Metallica? I still can't believe that, with so much left off, there's so much by them on the list - I haven't got the book, but I'd wager that there's almost as many Metallica albums on the list as there are Beatles albums.

but you raise a good point...they are overrepresented for what they are.

So can anyone give a run-down of the top 10 artists with the most albums in the 1001? (I'm not talking percentage of non-postumous output, that would probably go to Hendrix) but physical number of albums.

Oh - and you can't count Eno as a producer.

thanks for all the comments.


Oh... if you add up Morrissey and The Smiths you get 7 as well.