716. Disposable Heroes of Hiphoprisy - Hypocrisy is the Greatest Luxury (1992) 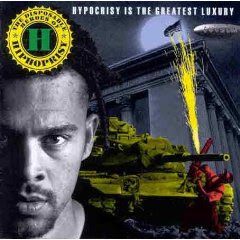 The first and most immediate reaction to this album is to see just how prescient it is... well maybe not prescient, but just that the world has not changed much since 1992. The first track has a chorus which starts "Bail Out The Banks". Hah!

From then on you realise that it is not only very smartly written but the music is pretty amazing too. It sounds like the love-child of Gil Scott Heron and Public Enemy and if you know those two artists then you know you are in for something good.

So the best thing about it are the lyrics. But then they show amazing subtelty in the arrangements, they even have an almost jazzy ballad track in Music and Politics, another of the greatest songs in the album. It is angry hip hop of the best kind, with a social and political consciousness. This is particularly rare coming out of the West Coast where Gangsta Rap was all the rage. So cherish this.

Trivia
From Wikipedia:
Their debut album, Hypocrisy Is the Greatest Luxury, received critical and underground acclaim upon its release in 1992, but was never commercially successful. Franti's lyrics address a wide range of issues, from Mass Media bias and abuse on "Television, the Drug of the Nation" to racial equality on "Socio-Genetic Experiment", in large part inspired by his own childhood, and Homophobia, in the song "Language of Violence". The album also included a cover of the Dead Kennedys track "California Über Alles" (with updated lyrics about Governor Pete Wilson). "Television," which received wide airplay on college and alternative radio stations, had previously been recorded by Michael Franti's first band, The Beatnigs. "Language of Violence" tells the story of a 15 year old boy who is beaten to death for his being gay by homophobes, and the subsequent ironic treatment of the murderers once sent to prison as a form of natural justice. The chorus contains an intricate commentary on how language can be used to dehumanize an individual, transforming them into an "inanimate entity", and thus rendering them disposable and easy to discriminate against.


Television The Drug Of The Nation... again great lyrics: