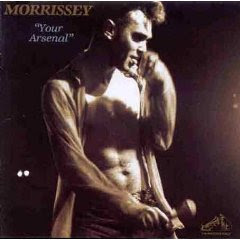 1. You're Gonna Need Someone On Your Side
2. Glamorous Glue
3. We'll Let You Know
4. National Front Disco
5. Certain People I Know
6. We Hate It When Our Friends Become Successful
7. You're The One For Me Fatty
8. Seasick Yet Still Docked
9. I Know It's Gonna Happen Someday
10. Tomorrow

Let's get one thing out of the way. Morrissey is a horrible person, whatever you might say about his music, whether you like it or not, he is a horrible person, and the lyrics here reflect that more than in other of his albums. So yes, he's a vegetarian... let me think if other evil famous vegetarians...I get nothing. Oh he is also a right-wing bastard who wants Britain for the British let me thing of other famous nationalistic racist vegetarian bastards... I get nothing.

So I pretty much put hipster fans of Morrissey in the same bag of hipster fans of Ayn Rand, when I am king they will be first against the wall. Yes I am a bleeding heart liberal, left-winger and also an emigrant in a foreign country. So Morrissey offends me more than most other people I am sure.

All that being said... musically this isn't bad, but I just want to throw up at parts of it. We Hate It When Our Friends Become Successful... do we? No, you do Morrissey because you are fucking horrible sub-human waste. "England for the English"? Who the fuck are the English anyway? Start by kicking all the Normans out. But then I find myself singing along to some of the tracks and I want to kill myself. And then he has a song making fun of fat people... that is just great. So your problems are with foreign people, fat people, people who eat meat and your friends. But glamorising the National Front and Hooliganism is fine. And you clearly have no problem with looking like a reject from Take That.

As I said the music isn't terrible, but I hate him. He would of course say the songs are all misunderstood, but really his actions and statements on and off-stage and on and off-record say the opposite.

Some tracks from the album were lyrically controversial, although much of the controversy was stirred up by the New Musical Express, who had turned against Morrissey by this time. "Glamorous Glue", though a personally conflicted and ambivalent song, was accused of anti-Americanism, while the similarly ambiguous "We'll Let You Know" was accused of defending football hooliganism. "The National Front Disco", meanwhile, was accused by some of glorifying the British National Front, a far-right group, and the ambiguity of lyrics such as "England for the English" was criticised.

While the album represents a consistent collection of songs, there was no standout hit single. The first song released from the album, "We Hate It When Our Friends Become Successful", peaked at number 17 in the United Kingdom. It also hit number two on the US Modern Rock Tracks chart. While this was an improvement from the singles from Kill Uncle, it didn't match the success of his earlier singles.

Despite this, a great number of singles were released from the album. The UK saw the release of "You're The One For Me, Fatty" (#19) and "Certain People I Know" (#35). In the United States, "Glamorous Glue" and "Tomorrow" reached #13 and #1 on the Modern Rock chart, respectively.

Morrissey is easily the most disgustingly overrepresented artist on this list. 4 solo albums as well as his 3 albums with The Smiths? This is probably the biggest issue I have with the editorial choices in this list. I can take Britney Spears, I can take Kid Rock, i can take Korn, but Morrissey...you make me sick.

How true. At least one Korn one Britney and one Kid Rock albums are worthy of their place as an example. So would one Morrissey album be worthy of its place. But 4?!

You do realise that Hitler wasn't actually a vegetarian, right?

Nazis aside, I don't think you should have gone all rabid on this album. It's a perfectly crafted pop record. If anything, you should have saved up all your spite for the next one on the list, "Vauxhall and I", because that's Morrissey at his mopey worst.

Wizard: Don't worry, there's plenty of spleen to go around.

I gotta laugh at your irrational hatred of the Moz. He's the one artist in whom you refuse to see "irony". Do you really think that Morrissey believes everything he sings? Put on his plus side that he loves large people, after all, he wrote "You're the one for me, fatty" - oh and he also want to kill people as he wronte "The Last of the Famous International Playboys".

I get it, you don't like him. I get it that living in Manchester and not liking Morrissey of the Smith can turn your head as they're pushed down your throat. But your write ups of Smiths and Morrissey albums are like an elaborate comedy routine.

Lanark: Maybe I actually like Morrissey and I'm just fucking with your head!

I don't think so because you would give the album a better overall rating.

Yeah...
Too much Morrissey. Just like too much Radiohead and too much Madonna.

It's strange to think that really great albums are out to open space for Morrissey. When I found out this list didn't had any Chico Science album i was like WtF... its a praised album and the best brazilian album in last 20 years... different from anything else in this list...

Anonymous: It's true... even though I love all of the Radiohead albums there's a couple which could be missed and they would still be well represented.

What I think is missing from Brazil, really blatantly is anything by Chico Buarque! Anything! At least Construcao.

Yeah... Chico Buarque is missing too!
I just remembered Novos Baianos, that are not on the list too, even if one of their albums was considered on a poll the greatest brazilian album ever.

And by the way, Misfits were one of the most influential bands ever, and they are not there. Morrissey is more important, i guess.

I think that a limit of 3 albums from any one artist would have concentrated their minds a bit more. Okay, it would be hard to choose 3 "best" Beatles or Dylan albums, but that would be 8 more albums from other bands you could include.

I actually agree that there's too much from Morrissey and The Smiths (and I speak as a angst-ridden teenage fan from The Smith's heyday), but I'd also agree that there's far too much heavy metal of all genres and too little non-western rock music in general - although this list is miles better in this regard than Rolling Stone's top 500 list for example.

Also by disregarding compilations, they had to shoe-horn unsatisfying live shows or padded out Long-Players from the likes of Jerry Lee Lewis, Little Richard, Chuck Berry and Sam Cooke and 60s girl bands like The Shangri-Las and The Shirelles are nowhere to be seen.

The list has many problems and Morrissey is a symptom, not the disease. However, the list has pushed me towards many many artists and bands I'd never heard of never mind been interested in. I just wish they'd limited the number of entries for single artists.

Oh - and if you're going to combine The Smiths and Morrissey together, you need to combine The Beatles entries with those of Lennon, McCartney, Wings and Harrison and also Neil Young's with CSNY and Buffalo Springfield to get a fair comparison.

Sorry - I've gone on a bit there. Apologies.

Whilst I am quite a fan of The Smiths, I can honestly say that none of Morrissey's solo albums would have made my list, and that he is ridiculously over-represented in the book.

The combination of Hatful Of Hollow and The Queen Is Dead tell you all you really need to know about him. Of course, what set those apart is the confident swagger of the rest of the band, without whom Moz is another English eccentric with a rabid cult following.