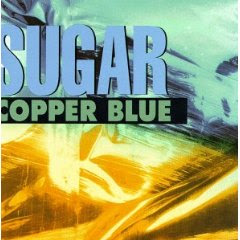 Husker Du are over, and Bob Mould now has Sugar. Sugar is quite a bit more mainstream sounding than Husker Du and unfortunately one of the qualities that I don't like about Mr. Mould is more apparent here: his voice. There is nothing wrong with Mould's voice per se, however, as my wife says he sounds a bit like the voice in crappy emo-rock bands. Well this might just be because they lifted his style.

That being said there are some pretty nifty tracks here, in fact the whole album is pretty infectious. So you soon get over Mould's voice and start enjoying the tracks for what they are. Highly intelligent pop-rock songs.

So in the end the album gets a big thumbs up from me, for the sheer quality of the tracks here. There is really no filler, it all hangs together perfectly, some of the songs are quite smart in terms of sound, just take the obvious Pixies tribute in A Good Idea, for example. We've been having an excellent crop of albums lately, and we aren't stopping here!

It was voted 1992 Album of the Year by the NME. All of the songs were written by guitarist/vocalist Bob Mould, who also co-produced with Lou Giordano. The song "The Slim" is about losing someone to AIDS. Musically, the band continues the thick punk guitar of Mould's other band, Husker Du, while slowing the tempo and emphasizing melody even more.

A limited edition initial run of the CD was released by Rykodisc in a front-and-back metal copper sleeve with each of the 2,500 copies containing a one-of-a-kind Polaroid photo taken by one of the three band members and stamped on the back with "Sugar Copper Blue Summer '92."