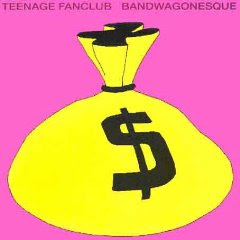 At least Fanclub's derivativeness is more interesting than that of Oasis, they at least get more than one band's influence, and none of them are as painfully obvious as the Beatles. There is Byrds here and Todd Rundgren but in a nicely updated way.

So in the end, even with the fact that this is borrowing a lot from the past I liked this album, it is at least refreshingly different from what else was going on at the time. I don't know if I can forgive them, however, for starting the whole Brit-Pop trend which created more crap than good albums.

The cover is designed by Sharon Fitzgerald. When Kiss member Gene Simmons (who trademarked a moneybag logo) was made aware of the record he sent a letter to Geffen Records - who in turn gave in and sent Mr. Simmons a cheque, according to Simmons audiobook Sex Money Kiss. In 2006 the album was performed live in its entirety as part of the All Tomorrow's Parties-curated Don't Look Back series.

You can't blame them for Britpop! That was the fault of Suede and Blur (and later Oasis). Teenage Fanclub were just doing their own thing, albeit one that owed a huge debt to The Byrds and Big Star.

man! I just found out they released an updated version of the book like they did with the movie list!

do you think you could post a blog with the new additions and submissions? I would appreciate it greatly seeing as it cost over a hundred dollars to order one and get it shipped to Argentina!

Anon: When I finish this list I will get an updated version of the book and resume the list. But until then I won't be getting a new version.

When I get the new version I will make a post saying what has been removed and then will start doing the new albums as they show up chronologically.

There's not that much added to the end of the book. Had a look at it yesterday. I work in a bookshop so I can do a proper comparison in a lunchbreak next week.

Ones I remember are "In Rainbows", "Sound of Silver", "Black Holes And Revelations", M.I.A., Klaxons, Christina Aguilera. I'll do a proper list next week.