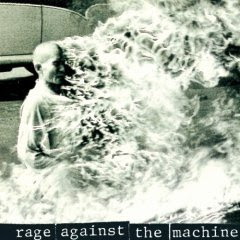 This is one of those albums that everyone had when I was growing up... everyone but me. I liked classical music... if I could I would go back and punch my snobby little skull in. I still wonder why no-one ever did it... I didn't even get bullied, shit I bullied people. And no grown-up ever touched me wrong :( What was wrong with me?!

That cathartic moment out of the way I can now say that I have since learned to enjoy Rage Against the Machine. I particularly like their lyrics as the communist baby-eater that I am. I also think wealth should be spread around, I know you Americans probably think I am an Ayrahb communist Muslim Nazi by now.

If this review sounds weird it is because I have been writing a literature review on the problems facing the study of Western Esotericism in Academia, and it is driving me crazy. I have a little wall of books in front of me between me and you dear readers, in front of the screen.

How can you not love an album with the lyrics "Some of those who work forces, are the same that burn crosses". Rage's combination of fury, rap and slow-burning retro metal makes them one of the most effective agit-prop bands in history, and thank fuck for that. We need more agit-prop of the good kind.

P.S. I have just endorsed Obama, eat your heart out Powell!

In 2001 Q magazine named Rage Against the Machine as one of the 50 Heaviest Albums Of All Time. The album is included in the book 1001 Albums You Must Hear Before You Die. In 2003, the album was ranked number 368 on Rolling Stone magazine's list of the 500 greatest albums of all time.

The album is known for its high production values, which are almost to the strictest audiophile standards. Some audiophile sites and magazines even go as far as using the album — in particular the song "Take the Power Back" — to test amplifiers and speakers.

Killing In the Name Of:

I saw these guys at a festival this year (they followed Bjork, of all people, on the stage next door to her) and I guess for the first two songs I was really excited and then by the third song I realised that they were just going to do the first two songs again, except with different words. The best part was when the Lead Guy asked the audience if they'd ever wondered that maybe everything they'd ever been taught might be a lie. Then they told a guy to get out of a tree.

They do have some cool riffs, though.

Hey, now that I think of it, I was never bullied either! Well, some guy was kind of a dick to me in high school but that was pretty much it.

I guess I just don't have enough angst to appreciate this album. Life hasn't been bad enough to go machine-ragin'.

It's a shame that the message has been watered out of it now by non-stop rotation on uber-commercialized alt.rock radio. A handful of the biggest rage fans I know are moderate conservatives who just inherited their political ideology from their parents, and don't pay attention to the lyrics.

Have you heard Lead Guy's new EP? It steers even closer to being the same song with different words five times. And Guitar Guy has been doing a really awful Woodie Guthrie impersonation as his solo career.

I'm not going to blast these guys for basically just doing the same song over and over again (hell, I like AC/DC and they do that better than anyone), but the term "packaged rebellion" comes to mind. Look at what label they were on, for starters. And don't give me "Well, The Clash were on Epic too..." because there's a big difference between the CBS Records of the 70's and the Sony Music conglomerate of the 90's/00's that's probably more guilty than anybody for the current sorry state of the music industry.

Matt: The message is still a good one no matter what label they were on. If you think of it the other way around they could perfectly well have chosen to be on the label that would let their message reach the greatest number of people.

And for all the people who talk about their repetitiveness: That's why you only need this album.