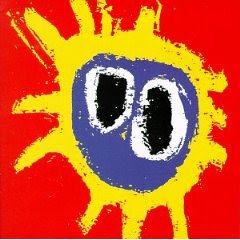 A bit all over the place and overrated are two things that can be said about this album. But I hear you say: "But this is a classic!". And then I raise two fingers at you if you live in Albion or just one if you live anywhere else.  Best thing about the album is the cover.

What is up with this album being the be all and end all of music? Yes, it is midly interesting if you were just listening to pop/rock in 1991 and suddenly you bought a Primal Scream album and dance music was revealed to you. If you were aware of what was happening around the world you would not be surprised.

The album was a massive departure from the band's early indie rock sound, drawing inspiration from the house music scene (and associated drugs) that was becoming popular at the time of its production. The band enlisted house DJs Andrew Weatherall and Terry Farley on producing duties, although the album also contained a wide range of other influences including gospel and dub.

The album's title track did not appear on the album itself; the ten minute dance track was also produced by Andrew Weatherall and sung by Denise Johnson. It appears on the Dixie Narco EP released in 1992, and featured in the opening credits of the now rare Screamadelica VHS video tape.

The album includes "Loaded", which was a top twenty hit single in the UK. Dance DJ Andrew Weatherall began remixing "I'm Losing More than I'll Ever Have", from their previous album, and the resulting track disassembled the song, adding a drum loop from an Italian bootleg mix of Edie Brickell's "What I Am", a sample of Gillespie singing a line from Robert Johnson's "Terraplane Blues" and the central introductory sample from the Peter Fonda B-movie The Wild Angels.

Loaded... what a fascinating video:

Well I haven't heard this album, but isn't the point less that it did things better than a lot of other folks, that that it brought a lot of things together into one place and did it quite well?

Well, having followed Bobby Gillespie through his (short) stint as a (bad) drummer from the Jesus and Mary Chain, through Primal Scream's first two singles and debut album where he was trying to impersonate Pete Shelley's singing style, I have to admit to being a tad surprised when he appeared in full Mick Jagger mode singing Rocks Off.

Mead: you could do the same with a mixed-tape. It doesn't mean it would be a good album. Quite well just doesn't cut it, it would be better if the album had some focus and then things could be done really well.

So I bought this on a lark as it was only $5, got halfway through the first track, and then tunred it off full of bitterness and just how badly they'd fucked-up "Sympathy for the Devil".

I should never have doubted you!