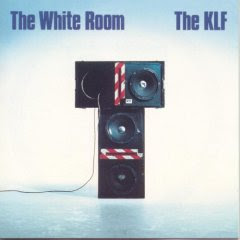 So many people suck this album's fat one that it might almost slip by you the fact that it is incredibly dated and pretty crappy. Before you come back telling me I don't get it, I will tell you that I have read and loved The Illuminatus! Trilogy, and that I did a Situationalist course last year. So yeah, I get it. Oh I have given a 9 or 10 to MC5.

But this is about music not some philosophy underpinning some of the lyrics. Just because the Justified Ancients of Mu Mu are referred to I don't have to cream myself. The album starts of with something that would not be out of place in a Mortal Kombat film, the kind of apocalyptic rave music that has been justly condemned to oblivion.

From then on the album doesn't get any better, there is some soul vocals and some stadium samples that give a certain grandiosity to some of the numbers but that don't fool me. It is house music... just that, not better than much other house music, and there is a reason why this is a style not overly represented here. The only way to hear it is on drugs and with sweaty nubile girls with little fluorescent clothing blowing on whistles while dancing in front of you. I tried to get my wife to re-construct this, but she wouldn't do it.

In October 1990, the KLF launched a series of singles with an upbeat pop-house sound they dubbed "Stadium House". Songs from The White Room soundtrack were re-recorded with rap and more vocals (by guests labelled "Additional Communicators"), a sample-heavy pop-rock production, and crowd noise samples. The "Stadium House" versions of "What Time Is Love?" and "3 a.m. Eternal" were immediate hits, with "3 a.m. Eternal" becoming the KLF's only number-one release. These "Stadium House" tracks made up a large part of The White Room when it was eventually released in March 1991, substantially reworked from the original soundtrack version.

I loved the concept behind the KLF (especially them buying all the advertising space in the last commercial break of the Turner Prize and demanding that the winner come out and collect £20,000 nailed to an empty picture frame for being Worst Artist of the Year).

The album suffers a lot from being dated, as you say, and the singles versions were actually a lot better.

But it's great to hear Tammy Wynette singing "They're justified and they're ancient and the drive an ice-cream truck".

It's sad that The White Room was on here instead of Chill Out which is much better and far more original. I guess because it didn't sell as nearly as many copies.....