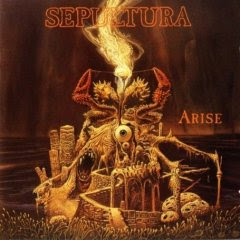 What better album to break the 700 barrier than Arise by Sepultura? I don't know, do you? Anything by Anything maybe? I don't know how popular Sepultura was in Anglo-Saxoniland, in Portugal it was too popular, possibly as it is a Brazilian band and the cultures of the two countries have quite a bit of interchange, I say interchange but I mean that everything Brazilian is huge in Portugal while the reverse isn't true.

So I had to bear with too much Sepultura as a child, I fell in the Sepultura cauldron when I was little. Not so much with this album but with Roots, which is actually better than this one. At least Roots has something more to distinguish it from other thrash while this one is pretty much standard fare.

It is not horrible as thrash goes, and comparisons with Slayer are not misplaced, but I still enjoy Slayer considerably more. Sepultura just aren't fast enough for my liking and their tracks are much too long. I want a short, sharp kick to the gonads, not a protracted torture session. Yes, I know that tomorrow the comments will be full of people who get their jollies listening to Sepultura who will think me a Philistine. I don't give a shit, if the day ever comes that I care what a thrash fan thinks about me or my opinion is the day I stick my head in the oven.

1. Desperate Cry (because it sounds like they are talking about an Insect rule [it's supposed to be Insane rule], hence having shits and giggles value)
2. Arise
3. Dead Embryonic Cells
4. Meaningless Movements

Throughout the years, Arise was continuously praised by the music press not only as a landmark release of Sepultura's career, but of extreme metal in general. In November of 1996, Q magazine thus remarked: "Arise remains their thrash high water mark, sounding like an angry man throwing tools at an urinal while reading the Book of Revelations."

First of all, Sepultura are like the Beatles of the 90's. There is no comparison between them and other bands of their time or any other time for that matter.

Third, it would be stupid and stupider more(!) for you to hate them just because you were over saturated with them in your youth. What did you know as a kid? Nothing.

Fifth, did I mention how them and the Beatles are alike?

That's all. Go cry to your momma 'cause you certainly don't know one thing about music.

At least it has a really cool album cover.

Very popular, though. Every second guy in my high school seemed to be a fan of either Sepultura or Metallica.

I'm amazed it took 700 albums for a hater post to come up.

Congrats Cisco, you have arrived! ;)

I love the deep critical analysis entrenched in the line:

I can see his reddened face as he typed that.

I'm hoping it's Cisco trolling his own blog because it was funny enough to be a joke.

What I said was 100% serious with no hint of irony.

Now excuse me as I ride away in my car powered by AIDS-denial.

Don't worry Mr. Grohl I got you first time :P

Agree with your review and your comments reference Slayer.It's brave to cast negatives on this album because it generally gets over heightened praise.