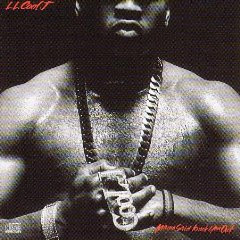 Well, as you probably have noticed by now I am not a big fan of West Coast hip-hop. It's like East Coast through blockbuster Hollywood lenses. Hence not that great. Still, this wasn't one of the worse offerings on the list.
I must say I like a couple of the tracks here, and particularly the title track, which is pretty cool. LL Cool J is actually one the the most original West Coast artists at this time...

Still, LL Cool J will never be Public Enemy, De La Soul or Tribe Called Quest in terms of quality, when it's all about the bitches and the money and boasting it frankly bores the hell out of me. Oh well, tomorrow there's a review of a better hip-hop album.

Edit: 27 June 2009, It has been brought to my attention that he is actually East Coast. Anyway the album sounds very West Coast to me, clearly heavily influenced by the by then very popular West Coast hip-hop scene.
Track Highlights

Mama Said Knock You Out marked the first of many self-reinventions L.L. Cool J would undergo to adapt to the hip-hop's changing atmosphere. Made as a comeback album after the critically-maligned Walking With a Panther, Mama Said Knock You Out revived the hardcore image of LL Cool J's early days that appeared to be damaged by his previous album. It was a critical and commercial success, and helped restore his reputation as a hip-hop icon.

Mama Said Knock You Out:

Hes not a westcoast rapper. hes from NYC (queens)

You are right! I'll edit to reflect that. Thanks.