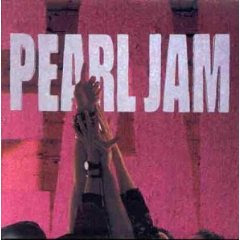 With the success of Nirvana we all knew this would happen sooner or later. The squeaky clean produced Grunge for mass consumption of the lowest common denominator consumer that wanted in on the latest fad.

It ends up being quite crappy. It doesn't offend me to listen to them or anything, but it is mediocre at best. It's an album for those without the musical commitment to actually get into something more gritty, and they could still say they were into the Seattle scene.

It is full of somewhat catchy, but mostly dull epics that in my wife's apt comparison sound like Nickelback. I know this is the minority opinion, but hey the minority is often right. Listen to Mudhoney and then listen to this and you will get what I mean, hard-rock posing as Grunge is not only crappy but almost a treason to the whole concept of Grunge. Too clean, not stripped down enough, come on the first seconds of the album sound like Peter Gabriel. So yeah... fuck 'em.

By February 1993, American sales of Ten surpassed those of Nevermind, the breakthrough album by fellow grunge band Nirvana. Ten continued to sell well two years after its release; in 1993 it was the eighth best-selling album in the United States, outselling Pearl Jam's second album, Vs. As of April 2006, Ten had sold 9.4 million copies in the U.S. alone, and has been certified 12x Platinum by the RIAA.

When I first played "Even Flow" in Guitar Hero III I was laughing way too hard upon remembering how the singing in this song goes.

How the hell did my sisters ever listen to this crap? Generation X confuses me.

The defining feature of both Radiohead and Nick Drake is the melancholy nature of their music. It's probably no suprise- Nick Drake killed himself after a lifetime of depression and chronic shyness while Thom Yorke (Radiohead's lead singer) has confessed to battles with depression.
______________-
adolfo
internetmarketing

Leaving that aside, I do confess to enjoying the odd Bush song. The only Pearl Jam song I ever really liked was Do The Evolution, and then mostly because of the video.