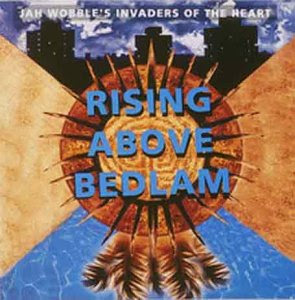 
Review
I'm off on holiday until the 25th! So it is a good time to look through the archives and see if there is something you missed  :P Think of it like one of those cheap clip-episodes on some crappy sitcom.
This is one of those albums whose influence is clearly wide-ranging while not being particularly interesting or good in and of itself. The whole mix of modern rock and world music is not completely new, Peter Gabriel and Paul Simon had explored the Sub-Saharan African side of it already. Peter Gabriel had actually recorded music for Scorsese's Last Passion of the Christ in 1990 which explores Palestinian sounds, and is actually a better album than this one, but it is more of an ambient album than anything else.

Jah Wobble takes on a more Spanish, Arabic and North African kind of music while mixing it with non-world content. The main asset he has here is the great Natacha Atlas, who would eventually have a pretty successful solo career as a singer.

This is a style that would eventually influence people like Jean Michel Jarre, Sting and Peter Murphy of Bauhaus as well as more world-music types such as Lhasa de Sela. So yes the style is a very influential one, but it is not completely successful. A lot of the music sounds incredibly dated, a bit tacky and slightly bad. It's a pity.

Following on from the success of several critical and popular landmark recordings, most notably "Without Judgement" and "Rising above Bedlam", in the late 80's and early 90s, respectively, Wobble has since collaborated with a wide variety of musicians. His explorations into World music predated much of the genre's popularity. Jah Wobble's 1994 album Take Me To God was influenced by world music genres and enriched by contributions from a variety of artists of diverse cultural backgrounds, including Baaba Maal, Dolores O'Riordan, and Chaka Demus, and its uplifting sounds made it both a critical and commercial success. His music has spanned a number of genres, including ambient music and dance music, and in 2003, reworkings of traditional English folk songs. Though he has released recordings since the early 1980s, Wobble has been quite prolific from the mid-1990s to the present. He now runs his own label, 30 Hertz Records, and tours regularly throughout England and Europe with his current band, Jah Wobble & The English Roots Band.

I took a Rock History class at community college in my first semester, as a blow-off affair.

The instructor relentlessly hyped this album as being one of the best of the 90s, but he also made sure to inform us that he was no longer culturally relevant by that point.

I'm thinking that many of the folks who wrote this list are the same way.

I am almost completely sure they are Matthew

Wouldn't Jean Michael Jarre be the one influencing this album and not the other way around? Wasn't he very active in the 70's?

Simon: This album is a clear influence on Jarre's Metamorphoses album from 2000.