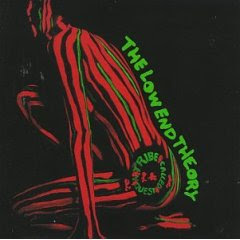 If the last album by TCQ was brilliant but a bit all over the place, looking for its musical footing, this one is brilliant and has completely found its style. And the unifying element here is the reliance on Jazz samples and particularly the use of double bass.

This makes this a rare thing, a hip hop album which is just cool, laid back and a joy to listen to irrespective of lyrics, it is just musically extremely rewarding. Of course TCQ is still lyrically brilliant, but the musical step-up is such that that almost gets second place here. It is also one of those albums that gets incrementally better with each listen through.

So this is another essential hip-hop album, and the last hip hop album on the list for a while now. I think we all need a little break, there will be more hip-hop in about 10 albums time, when we can let all this settle down. So listen to this until then, it will be rewarding.

The Low End Theory became a watershed album in the history of hip hop music. The album established alternative hip hop as a definable genre, distinguished by aware, often abstract or political lyrics, and a light-hearted sense of humor, along with jazz and other unusual sampling sources. The Low End Theory transformed alternative hip hop, leading the way from the jazzy pioneers like De La Soul towards future artists like Common and The Roots. The song "Scenario" helped break future hip hop star Busta Rhymes into the mainstream, partially as a result of its popular music video on MTV. Some sources, such as Angus Crawford of mvremix.com, say that "Scenario" is the best posse cut ever. Phife Dawg, who fans thought of as adequate but nothing special on the first album, greatly improved his style on this album. This amazing turn-around is highly respected in hip hop circles. Songs like "Buggin' out" and "Butter" showcased Phife's new confidence.

Dear god but I love this album.

Maybe not a deep statement, but man. It's almost perfect.