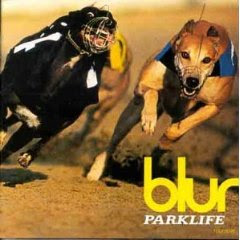 Here's another pretty great album by Blur. They take the principles introduced in Modern Life is Rubbish and develop them here to great effect. They are clearly taking the mantle of the Kinks and the Jam and repackaging it for the 90s.

At least they are repackaging it in new and innovative ways unlike some other bands that will go unnamed. Even if you can clearly see the influences in Blur they don't let them overwhelm them and mix them with other interesting elements from synth-pop as well as more original approaches as show in This is a Low.

So Blur retain their crown as the best Britpop band for the moment at least. I don't think they will lose it that fast. In fact I can't see them losing it at all. Yep, they're gonna keep it. No matter what people of no taste say.

Blur frontman Damon Albarn told NME in 1994, "For me, [Parklife] is like a loosely linked concept album involving all these different stories. It's the travels of the mystical lager-eater, seeing what's going on in the world and commenting on it." Albarn cited the Martin Amis novel London Fields as a major influence on the album. The songs themselves span many genres, such as the synthpop-influenced hit single "Girls & Boys", the instrumental waltz interlude of "The Debt Collector", the Oi!-influenced "Bank Holiday", the spacey "Far Out", and the fairly-hard rock "Trouble in the Message Centre". Journalist John Harris commented that while many of the album's songs "reflected Albarn's claims to a bittersweet take on the UK's human patchwork", he stated that several songs, including "To the End" and "Badhead" "lay in a much more personal space".

Who's better, Blur or Oasis?

People say Supergrass is great, but I dont quite know their music.

I still prefer Stone Roses over any other britpop band.

Disco: Pulp leave me a bit cold but I might have to revise my opinion when I spend some more time listening to them.

Anon: Supergrass is great. I still think I marginally prefer Blur. And I'm not a big fan of the Stone Roses, one album is ok the other one is abysmal, does not a great band make.

I agree with Disco that Pulp are (is?) better than both. Still, Blur are alright. I can't think of Stone Roses as really being part of the Britpop "movement" though: much more part of the 80s than the 90s. Second Coming was more death throes than resurrection.

Yeah, Stone Roses made only two albums, one was awesome and the other was weak with a couple of good songs.
But they released stuff before their first album, that was really good too.
Search for example for the song 'What the World is Waiting For', man if that´s not britpop I don't know what it is, it sounds a little like Oasis back in 1988...