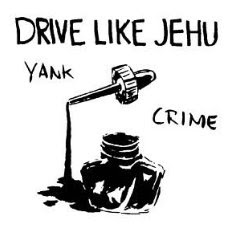 Another slightly blah album on this list. It can be superficially interesting and a lot of the tracks actually start quite well, reminding me at times of stuff like Pere Ubu. Eventually, however all the tracks kick into some run of the mill sludge.

Well, it isn't exactly run of the mill, some of the songs are quite complex, but never enough to hold my interest for what are often very long running times. The overall ambience of the album is quite dark but even that, which I would be predisposed to like, can really save the album for me.

There is nothing inherently wrong with it, it's just not very exciting and it is often just plain dull. That is never what you want from anything.

In later years, as guitarist John Reis found international recognition with his band Rocket from the Crypt, a gradually growing audience began to pinpoint Drive Like Jehu's music as a catalyst for the eclectic San Diego music scene and the emerging national emocore scene of the 1990s. In 2003 Reis re-released Yank Crime on his Swami Records label, including on it the songs from the band's Hand Over Fist/Bullet Train to Vegas 7" and the original version of "Sinews" that had appeared on the compilation Head Start to Purgatory.

I like what you're doing, and I started my own 1001 blog as well, but this is what I don't like about the blog and this particular article is a good example:

1. you misjudged it, because Yank Crime is quite a masterpiece.

2. not only did you misjudge it, you give the album a 7 while the review made it clear you didn't like it AT ALL. Most of the time you only use the points 7-10. You even gave the last Morrissey album a 7 while you fucking hated it.

1. That is your opinion, it is not mine. This is not about agreeing with the critics it's about charting my own opinions about stuff. So I did not misjudge it, I did not like it enough to give it more than a 7.

2. Yes, it is true that my grading system is slightly fucked up. So I will explain it to you.

4-5 - Stuff that I would happily chuck on a fireplace, but is not completely crap.

6-7 - Left me cold but I can recognise it as a work of quality, even if I don't put it on for my personal enjoyment.

8- I quite like it, just not enough to make it into my iPod, but one day I might play a couple of tracks from it at home or something.

Remember that this is a list of 1001 pretty good albums, it is not a random list, so it is natural that most albums will be on the 7 to 10 grades.

Now, I respect that you liked this album, and that is why I gave it a 7, it has quality, I just didn't like it. This blog is written mainly for me and not you. In 40 years time when I'm 65 I can look back on this and it will mean something to me. Not to you.

I respect you and blog nevertheless, don't get me wrong.

www.last.fm/user/kurt-vonnegut is my last.fm, see if we have more in common!

Eventually there will be an entire web community composed of nothing but people reviewing the 1001 albums you must hear before you die. I envisage some sort of Beneath the Planet of the Apes-style civilisation flourishing in a post-apocalyptic wasteland, built entirely around worship of the tome.

Tom: I would not be in the least surprised.