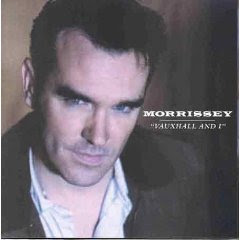 1. Now My Heart Is Full
2. Spring Heeled Jim
3. Billy Budd
4. Hold On To Your Friends
5. The More You Ignore Me The Closer I Get
6. Why Don't You Find Out For Yourself
7. I Am Hated For Loving
8. Lifeguard Sleeping, Girl Drowning
9. Used To Be A Sweet Boy
10. The Lazy Sunbathers
11. Speedway

More Morrissey. I ask the gods of list books why? Why more morrissey, why is he so fucking overrepresented while Nick Cave for example, a much better musician, lyricist and person is completely under-represented.

I am pretty sure one of the editors of the book is Morrissey's secret lover. And don't worry there's at least two more of his albums on the list! I mean the Smiths I get, all the albums included are significant, but this? Morrissey alone is never anywhere as good as The Smiths.

This album is a bit different from his previous offerings here, it sounds quieter and more carefully produced. Still, the lyrics are annoying as only Morrissey can make them and the music is not really that innovative that it deserves a place in history. There is a satisfying wish fulfilment fantasy to be had in the line from "I Am Hated For Loving" (another douchey title): "Anonymous call, a poison pen
A brick in the small of the back again".
If only.

The lead single off the album, "The More You Ignore Me, the Closer I Get", became the only song by Morrissey or The Smiths to achieve chart success in the United States, where it reached #46 on the Billboard Hot 100 and also became a #1 Modern Rock Tracks chart hit. In the United Kingdom, the song hit #8 and was the only single by Morrissey to reach the top ten during the 1990s.


Creepy Stalker song, The More You Ignore Me The Closer I Get:

Um... there's only one more album by him left. (Just fact checking)

I actually thought Ringleader of the Tormentors was here as well for some reason.

I was just wondering...
What do you think of brazilian band Legião Urbana and its frontman Renato Russo ?
Because here in Brazil lots of critics say he's like the brazilian Morrissey (I disagree about that). And I'm sure you, as a portuguese must have listened to it.