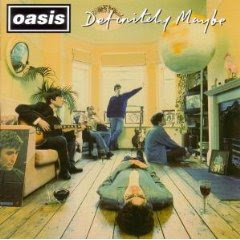 I love Manchester, I have lived here for 8 years now. But in the top 5 things I hate about this city, you'd probable have Oasis near the top, together with Morrissey and the weather. So from this you can imagine that this isn't going to be a very complimentary appraisal.

Oasis are a band for people who have never heard any music composed before 1975. Even if you've never heard an Oasis song, if you have a moderate knowledge of music you will have heard all of their songs. Not only is nothing new, they also do it badly and annoyingly.

You know why the Happy Mondays never did a "Happy Mondays sing the Beatles" album? It's is because it would sound shit and the Mondays are smarter than that. So why do people go crazy about a band who borrows all their tunes and sing them like the Happy Mondays? It is completely beyond me. If it was only that... the lyrics are appalling. Take Supersonic for example. Could the rhymes be more inane? Hardly. I can't even start to fathom how this band ever had a competition with Blur, and later, more amazingly, with Radiohead! They are not even in the same league, only as a high selling band.

Take the above as more evidence that people are stupid.

How shit are the lyrics and how annoying is the whole thing? Very! Supersonic:

Yes, the lyrics are stupid, but the tunes are catchy, and it gets way better by the next album.
And they don't sound EXACTLY like the Beatles, to me it's more like a 90s take on the Beatles, obviously they main influence. I don't see why people bitch so much about the fact that they sound so Beatle influenced, I don't see anybody bashing the Black Crowes because they sound similar to Zeppelin or the Stones.