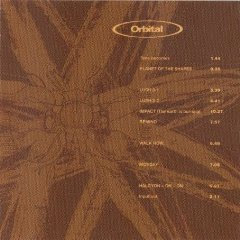 Some dance music from Orbital today and while it is pretty good as the genre goes it is also a bit hopelessly dated. Unfortunately that is a problem of the whole genre rather than a specific problem of this album, so it is better to try to judge it irrespective of that.

The tracks are quite good actually, for an album of instrumental electronic dance music where most tracks are between the 6 and 10 minute mark this is quite a feat. That is the great merit of the album actually. It is listenable as an album and not simply something to dance to.

So it is good for what it is, but I don't like what it is very much, unfortunately. If you are into this style of music you could do much worse of course, but it is very much an album of its time, which doesn't translate particularly well today.

The album begins with the same speech sample (by actor Michael Dorn in Star Trek: The Next Generation) which opened their first album.

The second song, "Planet of the shapes", contains a sample from the movie Withnail & I, saying "even a stopped clock tells the right time twice a day".

The brothers enjoy aural puns, and the use of the sample from Star Trek: The Next Generation (which appeared on the opening of their first album) was meant to infuriate listeners by making them believe for a few seconds that they had bought a mispressing. The muffled intro on "Planet of the Shapes" has the intentional addition of record static and crackles, followed by the sound of a needle skipping grooves then scratching across the record, also meant to infuriate fans, who bought the vinyl edition, by making them think their copy was less than mint.

Halcyon and on and on... really weird video:

I can understand why you would give this an 8/10, but if this was relative to its peers in the 90's dance category, this would easily be a 10/10. And because I am kinda still predisposed to 90's dance music from nostalgic kinda reasons, this is one of my favourite album. A very worthy addition to the 1001 list.

I agree the relative to its peers it is a pretty amazing album. I also think it is a good addition to the list as representing its style quite well.