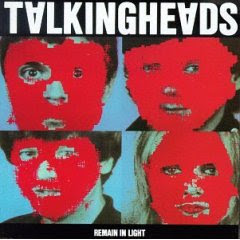 1. Born Under Punches (The Heat Goes On)
2. Crosseyed And Painless
3. The Great Curve
4. Once In A Lifetime
5. Houses In Motion
6. Seen And Not Seen
7. Listening Wind
8. The Overload

Finally the Talking Heads fulfil all of their potential and then some. This is an amazing album that is an essential addition to anyone's library. The Heads go deeper into the African rhythms and synths here and there is nothing but a good thing.

The whole thing is pretty much amazing, there is not a bad track in the whole album and specially interesting songs are Once In A Lifetime, probably the Heads' biggest hit and also a pretty amazing piece of music and Overload, which even if it is not one of the best songs in the album makes a brilliant work of mimicking Joy Division by a band which had heard of them but never heard them.

And if you know Once In a Lifetime you are missing a whole context, this is a very album album, it all works pretty well together and ends up being so much more than the sum of its parts. I had been waiting for this, thanks Heads, thanks Eno, I love you all... particularly Ms. Weymouth... she's a hottie.

1. Once In A Lifetime
2. Houses In Motion
3. Crosseyed And Painless
4. Listening Wind

Living Colour's Vernon Reid describes its African polyrhythms: "Instead of alienation turning into dark angst it turns into celebration, the dance."

Once In A Lifetime:

do a search for "Talking Heads - Live in Rome" on YouTube for some great live versions of these (and other)songs.

i just heard this album for the first time in whole the other day at your suggestion and was blown away. I never realized how strange once in a lifetime is and really how uncommercial it is before hearing it in the context of the album... it really is genius. Thanks.

Thanks for reading tommy :) Glad you liked it.