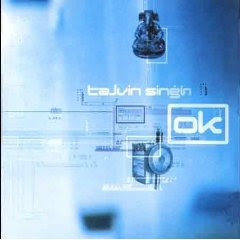 Talvin Singh brings us an album mixing traditional Indian and other Asian elements with electronic music, the result is interesting. Unfortunately it is often more interesting than actually that great.

The best thing about the album are actually the Asian elements in it and some innovative use of them, for example in the first track there is an Indian orchestral string section which is just great. The Japanese choir in the title track is also pretty nifty.

The worse element of the whole thing is the electronic stuff which sounds very much of its time and hasn't survived that well down the years. This is a general point about electronica but in this mix of influences it sounds particularly dated as many other have tried to do what Talvin does, saturating the market and often not being as proficient as him. So a mixed bag.

The title was chosen because of the universality of the word OK, which can be understood almost anywhere in the world. It is mostly a reinterpretation of Indian classical music with flute, sitar, and tabla. The album won him the Mercury Music Prize for 1999.