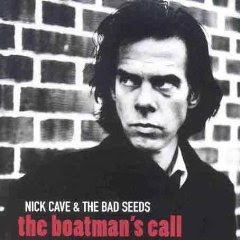 So here's an album in a completely different register to Murder Ballads, the last Nick Cave work we've had here. This is not only a display of Cave's versatility but also a show of just how amazingly good he is in this different register.

Boatman's Call is an album infused with pain and heartbreak, possibly partly inspired by Cave's break up with PJ Harvey. This also make the musical arrangements much lower key than in the previous album, this does not mean that they any less impressive.

Boatman's Call minimalism works just as well as any of Cave's albums full of bombast, this other side of Cave's music making just goes to show how multifaceted his music is and he is as an artist. Beautiful, painful music which everyone needs to listen to.

The album's tone is sombre and minimalist. Stylistically and lyrically it marks a major departure for Cave, away from full-band arrangements and character-based narratives towards the more intimate sound of Cave's solo voice accompanied by piano or a few other instruments. The tempo is also generally slow. Many of the lyrics seem to reflect on Cave's personal relationships and spiritual yearnings. Some songs are thought to be directed at either the mother of Cave's son Luke, Viviane Carneiro ("Where Do We Go Now But Nowhere?") or PJ Harvey, with whom he had a brief relationship around that time ("West Country Girl", "Black Hair" and "Green Eyes").

What would you suggest as the best Nick Cave album to move on to after Murder Ballads?

As much as I love Nick's bombastic records, I think when I'm pressed to nominate a favourite this is stil it. Or maybe Henry's Dream :)

After Murder Ballads? I don't know. The Boatman's Call was next chronologically, but if you don't have Henry's Dream, give that a go.

Meade: I'd advise you to just start getting everything Nick Cave ever did from the Birthday Party onwards, including Grinderman. They are, almost all, great, Nocturama is the exception although it has a great 14 minute track.

Part of the fun in following Cave's career is just how interesting his evolution is and hos consistently high quality it is.