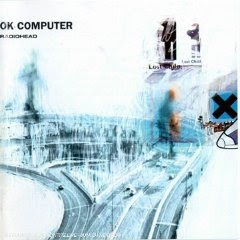 It's OK Computer, what the fuck do you think? Perfectly played, written, produced, probably the best album of the 90s.

OK Computer first appeared in a "best of all time" list three months after its release, placing 16 in a chart based on submissions by customers of Virgin Megastores. This chart heavily favoured recent releases, which suggested that OK Computer's popularity was a passing fad. However, OK Computer has since appeared frequently in professional lists of greatest albums. In early 1998, OK Computer topped a Q reader's poll of the greatest albums of all time, and in 2001 Q placed it at number one in a list of the top 50 pop albums of the last 15 years. A number of publications, including NME, Melody Maker, Spin, Alternative Press, Pitchfork Media, and Time placed OK Computer prominently in lists of best albums of the 1990s or of all time. In 2003, the album was ranked number 162 on Rolling Stone magazine's list of the 500 greatest albums of all time. Additionally, retrospective reviews from The A.V. Club and Slant Magazine have received the album favourably; likewise, Rolling Stone gave the album five stars in the 2004 Rolling Stone Album Guide, with critic Rob Sheffield saying "Radiohead was claiming the high ground abandoned by Nirvana, Pearl Jam, U2, R.E.M., everybody; and fans around the world loved them for trying too hard at a time when nobody else was even bothering."

Excuse me but the best album of the 90's is fucking (What's the Story) Morning Glory? because that album is just so fuckin' great.

I can't believe how dense you are.

Ahhhh OK Computer was the first Radiohead album I heard, and it just slipped right past me at the time. I ought to revisit this one...It wasn't until Kid A that I embraced Radiohead!

You haven't sold it to me, either. Maybe my judgment is clouded by the fact that I'd like to punch Thom Yorke in the face, though.

I don't know I think there's something wrong with me.

Don't get me wrong I LOVE radiohead. and in fact just saw them live in Buenos Aires two weeks ago, but this album has never done it for me. There are moments I love but I still prefer every other radiohead album on this list over this one.

It is too big?