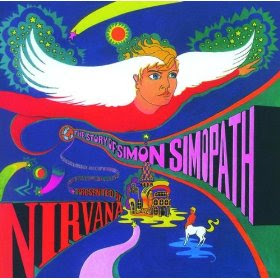 So one of the few great albums in the handful of quality British psych productions. Here you have a fully developed conceptual album following the story of the title character.

As psych would have it, this is a pretty weird story which is almost a prefiguring of stuff like Lamb Lies Down on Broadway... some guy wants to grow wings, he does, he flies to the moon meets a siren who he falls in love with and eventually gets married. Yeah.

But it is in the musical arrangements that the music really does its magic, this is powerful stuff. Take Pentecost Hotel or Wings of Love, or the music hall influence in Satellite Jockey. They correctly defined the album as a musical panto, and it is that but also more than that, it is a great slice of late 60's UK druggy psych.

1. Pentecost Hotel
2. Wings of Love
3. Satellite Jockey
4. In The Courtyard of the Stars

The story deals with a boy named Simon Simopath who dreams of having wings. He is unpopular at school, and after reaching adulthood (in 1999) goes to work in an office in front of a computer. He suffers a nervous breakdown and is unable to find help in a mental institution, but gets aboard a rocket and meets a centaur who will be his friend and a tiny goddess named Magdalena, who works at Pentecost Hotel. Simon and Magdalena fall in love and get married, followed by a jazzy party.

this is different Nirvana, not Kurt Cobain!