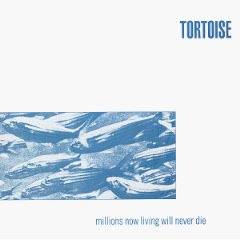 I know I will be blasphemous in the eyes of many when I say that this album did not impress me as much as everyone seems to claim it should have. In fact this has all pretty much been done before. Be it in bands like Can, Neu!, Faust and Tangerine Dream or on more Jazzy inflected Prog or the Pop/Ambient works of Brian Eno.

The way these elements are put together is also not particularly interesting. The idea that this album is revolutionary applies only to the sub-set of American musical production as all of these styles that they draw so heavily from (Prog, Krautrock and Ambient) are mainly European ones.

So yes the album is quite good, but frankly it is not only overrated but also slightly boring in parts, with some of the tracks making their point in the first 5 minutes but dragging it on into well over 10 and sometimes even getting to 20 minutes. The progression inside these mammoth tracks is not that interesting, at times it even seems that a completely different track has started and it was just kept there for track length's sake.

The album's title comes from a phrase used in the Jehovah's Witness faith, especially in the early 1900s.~

To say Djed is long and boring in parts is to say Autobahn by Kraftwerk is long and boring, which is completely wrong because it is supposed to be a long and slowly developing song, changing from styles to and from. I can understand if you gave it a 7/10 but Djed is easily the best song on the album (in my opinion). I suppose you already knew you would get a comment like this anyway though :P

I thinkt he reason these highly derivative albums receive such praise probably has a lot to do with the way they merge all there different influences into something sort-of new. I mean, an album like TNT, for example, is innovative purely on the strength of the new technology it employs and the shear diversity of its influences. Even if the elements are all old, they could never quite have been combined in such a way before, sue to the lack of a necessary historical perspective. That's basically the 90s in a nutshell, though.