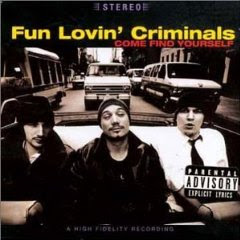 If there is one thing to say about the Fun Lovin' Criminals it is that they can be quite fun, if there are two things, the second would be that they are also not that great. I mean I get where they are coming from, trying to be the new Beastie Boys with a more chilled mood, but they are not nearly as good.

There's a great track here, Scooby Snacks, a song which I have heard countless times and am still not tired of, a feat in itself, and it has also stood the test of time quite well.

Other than that, the lyrics are often funny, but not hilarious, the samples are occasionally interesting but never fascinating, and the album is digestible but not scrumptious.

In an interview on UK television, the lead singer Huey explained that 'Scooby Snacks' in this case were diazepam (Valium) tablets allowing bank robbers to be so cool.

So why the 8 out of ten, then. Don't get me wrong, your review is SPOT ON, but does it really warrant an 8? I'm curious what your method for arriving at your score is.
I really enjoy your blog, though, I think your analysis are well thought out and intelligent. Good on ya.

In actuality anything below nine I'll probably never listen to again. I have often considered quitting numbers completely, because honestly they almost always come up in 7 to 10, as this is a list of good albums, not random shit off the street. The Fun lovin's have a fun album which isn't great, hence the 8. Still if it was a 5 star thing it would probably get a 3.

It would really be a 6/10 if you would only give it 3 stars, so the 8 don't make a lot of sense - for something that is barely above an average - 6 seems fair to me - but each to their own - your blog is hugely entertaining.

Can I ask why you stopped the movies at Dog Star Man? If bored of chronology why not go from more recent and work backwards until you get to where you left off?