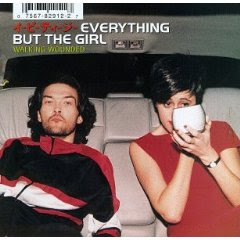 Everything But The Girl come up with the brilliant idea of adding some trip-hop beats to their more-intelligent-than-average pop and hence create their most successful album to date. It is not hard to see why, it is an album perfectly in tune with the musical environment of the late 90s.

Trip-hop, drum and bass and even jungle are now in 96 starting to become a big part of the mainstream, particularly in the UK, as such EBTG's bet paid off nicely and the album is pretty good for what it is. Pop with a drum and bass/trip-hop tinge.

The flipside of the story is that this type of music has not dated particularly well, fortunately EBTG couple it with strong song-writing skills and Tracey Horne's lovely voice (shame about the face).

Walking Wounded is a 1996 album by Everything But the Girl; their ninth studio release. It is their highest charting album to date, reaching number 4 in the UK and number 37 in the U.S.

This was the first album in which EBTG adopted a more electronic and dance style after the success of the remixed version of "Missing" from their previous album.


Single. Don't laugh at the internet people! They have axes and nocturnal habits.