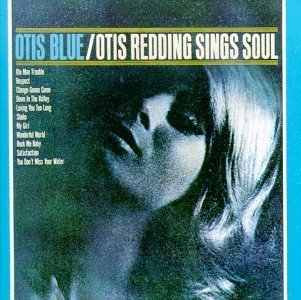 This is one of those albums, which I really like but can't really put my finger on why. This, of course, makes for a crappy review. I really like it, I don't love it however, but it has its moments, and although all tracks are good here some outshine the rest of the album. This is the case of Respect and Satisfaction, as well as the eternally schmaltzy My Girl.

Yes, the Satisfaction is the Rolling Stones song, which Otis covers here surpassing the Stones by quite a lot. The album is a mix of covers and originals and he is equally good on both. In fact he is quite amazing throughout and it is a pity that he died so young, a lot could have developed from here.

Otis Redding had a very expressive voice, in fact that is probably the best thing of the album. There is nothing particularly innovative about it in terms of sound, but Otis just has a great voice which adapts itself equally well to the more rocky or ballady styles. Still, for some reason it doesn't blow me out of the water, although I listen to it with a lot of enjoyment... maybe if he had lived longer, it would have been a different case. It is however a case of "listen to it and make up your own mind".

Redding and six others were killed when the plane on which they were traveling crashed into Lake Monona in Madison, Wisconsin on December 10, 1967. Ben Cauley, one of the members of Redding's backup band, The Bar-Kays, was the only person aboard the plane to survive. He had been asleep until just seconds before impact, and recalled that upon waking he saw bandmate Phalon Jones look out a window and say, "Oh, no!" Cauley then unbuckled his seat belt, and that was his final recollection before finding himself in the frigid waters of the lake, grasping a seat cushion to keep himself afloat. Otis Redding's body was recovered when the lakebed was dragged with a grappling hook and photos exist of his body being brought out of the water. The cause of the crash was never precisely determined. Redding was only 26 years old when he died. A persistent Madison local urban legend continues to hold that the body was never recovered; generally asserting that an attache case with a large sum of money likewise disappeared.

Redding was laid to rest in a tomb on his private ranch in Round Oak, Georgia, 23 miles north of Macon.

Hey people! You can see a picture of his body being dragged out of the lake here! And don't say I'm not your friend!
Posted by Francisco Silva at Friday, June 30, 2006