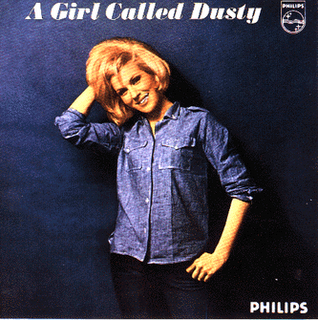 Ok, I admit it. I like Dusty Springfield, she was a nice person, refused to play in front of a segregated audience in South Africa, has a great voice and she was an attractive lesbian...at least until she was older, where there was something of the Dutch water barrier to her. If there is something I like it's attractive lesbians, needle in haystack, but there you go. (Except in the L-word, websites I peruse and in my brain where no one has a flannel shirt and it's lala-fantasy lesbian land.)

So there, I like Dusty and she's got some pretty nice songs too. Who, tell me! Who could nay-say Twenty-Four Hours From Tulsa? No one, that's who! And that is not the only good track here, Anyone Who Had a Heart is a personal favourite, the guitars in it and the piano make it an almost Pulp Fictiony track. Yes, of course there is a 10 Feet-Wide Gouda Wheel of Cheese tm here, but don't let that put you off, it is a great album.

Dusty Springfield wouldn't be the artist most easily identifiable with being British, and in truth this album sounds no different in style to many other soul singers from the States, and that was exactly what she was trying to do, so there is nothing wrong with it. A Girl Called Dusty is a very good soul album, and a lot of fun.

Do listen to it, either by streaming from Napster or buying from Amazon UK

1. Anyone Who Had A Heart
2. Twenty-Four Hours From Tulsa
3. Will You Love Me Tomorrow
4. Wishin' and Hopin'

At various times during her life and career, Springfield either identified herself or was identified by others as being bisexual or a lesbian. Springfield first broached this idea into the media mainstream in 1970 when she told a reporter for The Evening Standard that "A lot of people say I'm bent, and I've heard it so many times that I've almost learned to accept it....I know I'm perfectly as capable of being swayed by a girl as by a boy." By 1970 standards, Springfield had made a very bold statement.

There is some debate among friends and fans regarding this issue; Springfield was intensely private about her personal life, and after the 1970 interview, she did not directly address the question or make a definitive statement regarding her sexuality in the press. Springfield occasionally made subtle references; during a 1978 concert at Drury Lane in London, attended by Princess Margaret, Springfield noted a number of gay men in the front rows and made a comment that she was "glad to see that the royalty wasn't confined to the box". At another concert, Springfield told her audience, “Give a butch roar or a girlish shriek, I don’t mind who does what, sort it out for yourselves!”

Several biographies about Springfield also have conflicting information. Lucy O'Brien's biography, Dusty (Sidgwick & Jackson, 1989) mentions the rumors in passing, whereas Penny Valentine's 2000 book Dancing with Demons, which included significant contributions by Springfield's friend and manager Vicki Wickham, identifies Springfield as a lesbian. Singer-songwriter Carole Pope of the Canadian band Rough Trade disclosed in her 2001 book Anti-Diva that she and Springfield had a relationship and lived together in Toronto when Springfield worked with her. (Pope wrote the song "Soft Core" which appeared on "White Heart". Wickham was Springfield's close friend and manager for over a decade of the enigmatic British singer's career, she stated that Springfield was terrified of divulging the fact she was lesbian.
Posted by Francisco Silva at Saturday, June 24, 2006