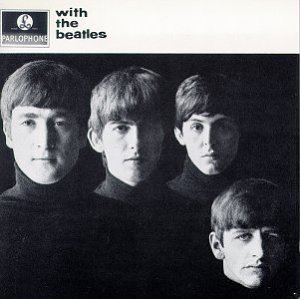 I am not a big fan of early Beatles. I quite like their later stuff, but early Beatles are not really my cup of tea. So, with that out of the way this is an enjoyable album but not that earth-shattering. They sound a bit like the Everly Brothers but with a rawer sound. In this case however that doesn't make them better or worse than the Brothers, it is just different.

The other major problem with this album is the fact that some of the songs have been so overplayed, particularly All My Loving that you can't really listen to them with an open mind anymore. An exception is Money, which although it isn't an original is a great, great version. Probably the best version, with the possible exception of the Flying Lizards and their "prepared pianos". But maybe I'm weird.

It is overall a listenable album, quite a bit dated however, like all early Beatles albums, but very important nonetheless as the first British album to sell above 1 million. And it's the birth of the Beatle craze which came to define music for the next decade. If only for its historical importance, it is an essential album. And one which you cannot die before you listen to, so if you want to live forever never listen to it. I am so gonna be doomed in 3 years time when I finish this list. I am however writing the 1001 Books blog as well which will take something like 80 years so... yay!

The Beatles are a notoriously litigious bunch, although I don't think George and John can carry an argument that well nowadays, and this means that neither Napster nor Itunes has the album, so you need to buy it with money at Amazon UK

. Or buy it with your eternal soul by downloading it illegally.

There were four of them.

There's two of them.

The bowls that they used as a mould to do their haircuts have recently been sold at a Sotheby's auction for 7 million pounds.
Posted by Francisco Silva at Tuesday, June 06, 2006

Anonymous said...
This comment has been removed by a blog administrator.
2:58 am

Unlike you, I am a big fan of early Beatles' music. I'm a fan of their middle and late music as well, but for different reasons.

What I like about the early music, dated as it may be, is how they perfected the pop song. Their melodies, vocals and hooks are ridiculously catchy. Some of their greatest melodies came out of the early years. They didn't start getting really innovative until later, but man, they still had great songs. I couldn't imagine rating any of the 1001 Albums entries for the Beatles below a 7/10 (on your scale).

Having said all of that, there are only a handful of really great songs on With The Beatles:

I also enjoyed the cover of Please Mr. Postman because I like the melody and, of course, the cover of Money (That's What I Want).

Anonymous said...
This comment has been removed by a blog administrator.
3:04 am

Yeah, they just don't do it for me.

I removed the superfluous comments :)

they should've also put "Please Please Me" in this 1001 album list.

it's been long time!