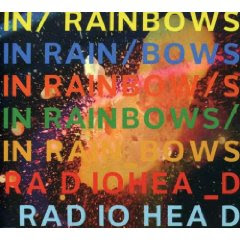 I expect so much from Radiohead by now that this album came as a bit of a disappointment. I always hope they are going to push the envelope further on strange music, but here it seems like they took a small step back.

The album feels like it is a continuation of their previous work, many of the sounds here would not have appeared if not for their earlier work. In that sense there is a very natural evolution that leads to this album.

However, the step back is taken in making their music more easily approachable, as such it doesn't really surprise that much. If Hail to the Thief was a return to a more traditional song structure after the great experiments of Kid A and Amnesiac, In Rainbows takes that further but it also conforms to more mainstream music. However, this is still a great album, don't get me wrong, still better than 99% of the stuff out there, just that my expectations are very high.

Days after announcing the album's completion, Radiohead released In Rainbows as a digital download that customers could order for whatever price they saw fit. Upon its retail release, In Rainbows entered the UK Album Chart and the U.S. Billboard 200 at number one; by October 2008, it had sold more than three million copies worldwide in both digital and physical formats. The album earned widespread critical acclaim, and was ranked as one of the best albums of 2007 by several publications. In 2009, the record won two Grammy Awards for Best Alternative Music Album and Best Special Limited Edition Package.